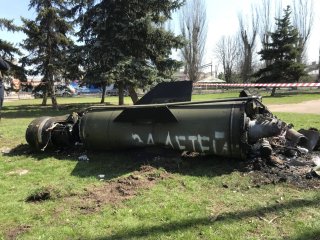 Western-supplied artillery, helicopters, armored vehicles, ground radar, and thousands of small arms and ammunitions have made a huge difference in repelling Russia’s invasion of Ukraine. However, as recent Russian cruise missiles strikes on Kyiv have revealed, the Russian cruise missile threat is dire and has not been stopped.

New artillery, including 155m Howitzers, that can destroy targets 30 km away could potentially target Russian launch sites if coupled with effective surveillance, targeting, and precision. However, Western arms shipments have not included the interceptors needed to knock them out of the sky en route to Ukrainian targets. Thus, to make Ukraine’s air defenses really bite it, appears that they may still need more powerful “interceptors” to better defend against incoming Russian ballistic missiles and rockets.

One option is the Patriot interceptor missile, an air defense weapon used with great effect in Iraq over the years. Using a radar and fire control system, the Patriot can track and then fire an interceptor to take out an approaching enemy missile in flight. When asked if the Patriot could go to Ukraine, Pentagon spokesman John Kirby said the weapon would not be sent because it requires U.S. soldiers to operate, and the United States has rejected putting its forces on the ground. But could U.S. forces train Ukrainians to use the Patriot in a nearby NATO country? It’s certainly possible: Kirby said the United States is now training Ukrainians on weapons systems in Germany and suggests more is on the way. Such new training would be a game-changer, as Ukraine does not have sufficient defenses against Russian cruise missiles, rockets and ballistic missiles, many of which can travel hundreds of miles.

How about Israel’s Iron Dome, another missile defense interceptor system being built both in the United States and Israel? Like the Patriot, this missile could add a new dimension to Ukrainian air defenses, which are still urgently needed to protect civilian areas.

What about offensive rockets? They are not on the list and Ukrainian president Zelensky has specifically requested Multiple Launch Rocket Systems for his military. These weapons would introduce a new ability to go after Russia’s cruise and ballistic missile launchers. Perhaps the United States could even give them the GPS-guided precision Guided Multiple Launch Rocket System, a ground-fired rocket able to pinpoint targets at ranges out to 80 km.

Kirby has said that the Pentagon’s assessment is that most cruise missile launchers and ballistic missile launches are coming from inside Russia and Belarus. Thus, Ukraine would need to use drone surveillance to find them before firing precision rockets at the located targets. This is undoubtedly risky, but it would help obstruct Russia’s ability to launch devastating rocket and missile attacks into Ukrainian neighborhoods.