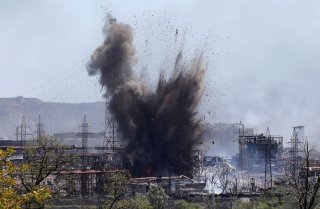 Ukraine's Deputy Prime Minister Iryna Vereshchuk said on Wednesday that Ukraine is probing a potential deal to swap Russian prisoners of war for the Ukrainian troops defending the Azovstal plant in the southeastern port hub of Mariupol. "As of now, it is impossible to unblock Azovstal by military means. Azovstal's defenders do not want to surrender. It is worthy of respect. The Russians do not agree to an 'extraction.' This is a reality, but it is not surprising from the Russians," she wrote on Telegram, according to Ukrainian outlet Ukrinform. "But we are looking not for an ideal option, but for a workable one. As a first step, we offered the Russians the following exchange: We are taking our badly wounded guys from Azovstal along a humanitarian corridor. Instead, we are handing over Russian prisoners according to the standard rules of prisoner exchange.”

Vereshchuk clarified that no agreement has been reached yet, adding that negotiations are ongoing. There is no indication that the Kremlin, which has insisted that the Azovstal garrison's only option is to surrender to the Russian forces that have encircled the facility, is willing to seriously consider Kyiv’s proposal.

The troops in Azovstal—composed primarily of the ultranationalist Azov Battalion—have made frequent appeals to international leaders, including Turkish president Recep Tayyip Erdogan and U.S. president Joe Biden, to facilitate their “extraction” to the territory of a third-party state. Major Serhiy Volyna created a Twitter account to ask business tycoon Elon Musk to help mediate an extraction agreement. “Help us get out of Azovstal to a mediating country. If not you, then who? Give me a hint,” Volyna tweeted.

Chechen leader Ramzan Kadyrov wrote on Telegram in late April that most of the garrison wishes to surrender but is being blocked from doing so by the Azov Battalion’s senior leadership. Russia’s Defense Ministry had previously claimed that Kyiv has expressly forbidden the Azovstal garrison from surrendering to Russian forces.

Russian and Russian-aligned separatist forces consolidated control over most of Mariupol in early April. The city, which will reportedly be absorbed into the breakaway pro-Russian Donetsk People’s Republic (DPR), is beginning to slowly reopen under DPR administration.

The Azovstal facility, located in an industrial area to the city’s south, has managed to hold on for months after Mariupol fell because the plant houses a sprawling network of underground rooms and corridors that have since been fortified into a de-facto fortress. Russian troops have encircled the location, subjecting it to near-constant shelling and airstrikes. Russian efforts to storm the facility have reportedly intensified following the recent evacuation of civilians trapped inside the plant, with DPR head Denis Pushilin reportedly telling Russian state news outlet TASS that “our units’ hands are no longer tied.”