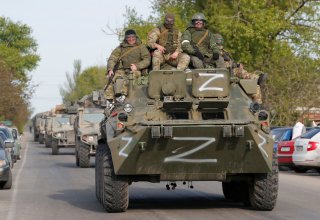 Ukrainian president Volodymyr Zelenskyy said Ukraine’s armed forces continue pushing the Russian military back in the east and south as the Kremlin doubles down on its war effort with a chaotic and controversial mobilization drive.

“This week alone, since the Russian pseudo-referendum, dozens of population centres have been liberated. These are in Kherson, Kharkiv, Luhansk and Donetsk regions all together,” said Zelenskyy in a nightly address.

Ukrainian forces captured the city of Lyman—a key logistics hub in the eastern Donetsk region—last week, a move that Kyiv officials said sets the stage for further offensives in the neighboring Luhansk region. Russia’s Defense Ministry confirmed earlier this week that Ukrainian troops gained control over several settlements in the southern Kherson region, pushing the front lines downward as Ukrainian troops cut deeper into Russian-occupied territory. The invading Russian forces captured the regional capital of Kherson, which provides a land bridge to Crimea and serves as a staging post for offensives in the direction of the Mykolaiv-Odessa axis in the early stages of the Ukraine war.

Ukraine’s claimed advances come shortly on the heels of Moscow’s decision to move forward with the annexation of four occupied regions—Zaporizhzhia, Kherson, Donetsk, and Luhansk—last week following five days of referendum voting denounced by Kyiv and Western governments as illegitimate.  Russia currently does not fully control any of the Ukrainian regions it claims as its own.

Russian president Vladimir Putin on Wednesday appeared to acknowledge the severity of Russia’s battlefield setbacks while insisting that the situation in the occupied territories will be “stabilized” in the future. “We assume that the situation in the territories incorporated into Russia will be stabilized,” he said in televised remarks, according to the Moscow Times. “When the situation stabilizes, we will be able to calmly develop these territories and help them to strengthen the country as a whole,” the Russian leader added. In September, the Kremlin issued a decree on “partial mobilization” to call up as many as 300,000 qualified reservists. Russian military observers assessed that the battlefield effects of Moscow’s mobilization decision will not be felt until later this year.  Putin’s seeming acknowledgment of Russia’s ongoing military challenges comes on the heels of his admission last week that “mistakes” were made in how the draft is being conducted. "In the course of this mobilization, many questions are coming up, and all mistakes must be corrected and prevented from happening in the future," he said. "For example, I'm thinking of fathers of many children, or people suffering from chronic diseases, or those who are already past conscription age."

Western analysts have cast doubt on the efficacy of the Russian mobilization drive. "The Russian mobilization system is struggling to execute the task Russian president Vladimir Putin set and will likely fail to produce mobilized reserve forces even of the low quality that Putin's plans would have generated unless the Kremlin can rapidly fix fundamental and systemic problems," wrote the Institute for the Study of War last month.