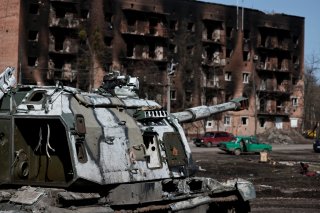 Ukraine used cluster munitions to drive Russian forces out of a village in eastern Ukraine, the New York Times reported.

Ukrainian forces retook the village of Husarivka, located in the broader Kharkiv region, on March 26. The streets showed signs of shelling by cluster munitions, a type of internationally banned explosive weapon. Citing evidence discovered on site, the Times concluded that the cluster munitions were “very likely” launched by Ukrainian troops that had tried to retake the area earlier. The warhead of one such cluster munition landed next to the home of a local man identified as Yuri Doroshenko. “They were shelling and it hit the street,” Doroshenko said. The weapon in question was identified as a 220-millimeter Uragan artillery rocket.

Though no one died in that particular strike, the Times found that at least two people were killed over the past month of Ukrainian shelling.

Cluster bombs, which come in many different types and can be fitted with anti-personnel, anti-materiel, and anti-armor munitions, split open in mid-air to disperse numerous “bomblets” over a wide area. Cluster munitions were banned by the 2010 Convention on Cluster Munitions because of the “unacceptable harm” they can cause to civilian populations. These weapons are particularly dangerous to civilian populations, as around 20 percent of them reportedly fail to detonate on impact but can still explode when touched or handled. More than 100 countries are party to the 2010 Convention—Russia, Ukraine, and the United States are not among them.

The Russian military has repeatedly accused Ukrainian forces, particularly groups described by the Kremlin as Ukrainian “nationalist battalions,” of shelling their own territories since the Russian invasion of Ukraine began in February. Mikhail Mizintsev, chief of Russia’s National Defense Management Center, claimed earlier in April that Ukrainian forces shelled civilian cars near the settlements of Dergachi and Slatini as they were trying to leave the Kharkiv region in the direction of Russia. These claims, which have not been verified, center around the Kremlin’s claim that civilians in eastern Ukraine who wish to flee their besieged cities are being “held hostage” by Ukrainian nationalist forces, who are purportedly using them as shields against the Russian military. The Kremlin has claimed that Ukrainian forces have regularly shelled civilian locations in the pro-Russian separatist Donetsk and Luhansk People’s Republics over the past eight years of the conflict in the Donbas region. Moscow cited the alleged attacks as one of the justifications behind the February 24 invasion, referred to by the Kremlin as a “special military operation.” Ukraine has launched strikes against separatist forces in the Donbas since the war began in 2014, but Kyiv has consistently denied targeting civilians.