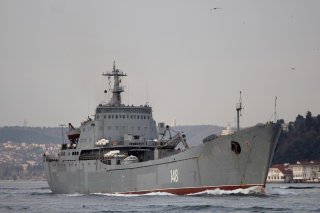 Ukrainian forces appear to have sunk a Russian Alligator-class landing ship in the Russian-occupied port city of Berdyansk on Thursday. Ukrainian officials originally claimed the ship sunk was the Orsk, though Ukrainian officials later identified it as Orsk’s sister ship Saratov.

The attack occurred at roughly 7:45 a.m. local time on March 24, exactly one month after Russian troops entered Ukraine following Russian president Vladimir Putin’s declaration of a “special military operation” to “demilitarize and de-Nazify” the Ukrainian government in Kyiv. Although the ship’s cargo was unknown, a large explosion was visible, suggesting flammable or explosive material onboard. The number of Russian casualties from the strike is not known.

Two other nearby Russian warships also docked in the port, the Ropucha-class landing ships Tsaesar Kunikov and the Novocherkassk, quickly sailed away from the burning ship after the strike. At least one appeared to also have a fire on board

U.S. and British defense officials lauded the successful sinking of a Russian warship by Ukrainian forces miles behind the front line of the ongoing fighting between the two sides. Earlier this week, the Orsk’s arrival in Berdyansk was described as “an epic event that opens up opportunities for the Black Sea in terms of logistics by using the port of Berdyansk infrastructure to the full extent,” according to Russian state-run news agency TASS, quoting a Russian TV report.

In addition to describing the ship’s logistical capabilities—TASS noted that it could carry twenty tanks or forty armored personnel carriers—both outlets suggested that it would help Russia to resupply its forces at the front line, which have run increasingly thin on armored vehicles throughout the duration of the conflict.

The loss of a warship—which naval experts have contended is probably the single most significant loss of the war for Russia—is particularly acute because Turkey, which controls access to the Black Sea, has closed its waterways to all ships involved in the war. Therefore, while Russia can continue to replace tanks and other land-based armored vehicles with reinforcements from within the country, it cannot replace ships lost in the Black Sea with reinforcements from the Mediterranean.

It has also been suggested that after the ship’s sinking, Russian naval planners might take extra precautions with the remaining ships, keeping them safer from Ukrainian attacks but limiting their effectiveness to land forces. One advantage that the Russian navy has is that Ukraine appears to lack guided anti-ship missiles, meaning Russian vessels cannot be effectively targeted at sea. The attack against the Orsk appears to have been conducted with an OTR-21 “Tochka” missile, a Soviet-era missile that lacks a guidance system. That means that it can only be fired at stationary targets such as the ship in port.

Russia’s defense ministry has not commented on the attack.