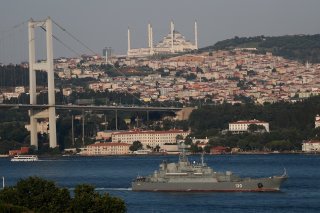 The Turkish government has shut down the Bosporus and Dardanelles straits for all military vessels. The decision effectively blocks access to the Black Sea for Russian warships located in the Mediterranean and around the world.

Turkish president Recep Tayyip Erdogan announced the shutdown on Monday, citing the Montreux Convention of 1936 as a legal justification. That convention allows Turkey to block nearly all military ships from passage through the straits, particularly during military conflicts in which Ankara is neutral. During the Second World War, Turkish leader Ismet Inonu used the rule to prevent Nazi Germany’s navy from entering the Black Sea. That blocked the Kriegsmarine from using its ships against Soviet defenses along the southern Ukrainian coast and in the Caucasus.

After Erdogan’s remarks, Turkish foreign minister Mevlut Cavusoglu indicated that Turkey would continue to allow passage to ships returning to their bases in the Black Sea, a situation that the Montreux Convention exempts. That would allow Russia’s Black Sea Fleet to return to its bases along the coast.

However, at least two Russian warships – the RTS Marshal Ustinov and the RFS Varyag, respectively positioned near Italy and Syria – will be isolated from the Russo-Ukrainian War by Turkey’s move, according to the U.S. Naval Institute.

While Ukraine could theoretically be impacted by the declaration, it is unclear why Ukrainian vessels would travel from the Black Sea to the Mediterranean. The Ukrainian Navy was severely weakened by the invasion and annexation of the Crimean Peninsula by Russia in 2014, as much of its fleet was positioned there and was later seized by the Russians.

The Russian Navy has played a more active role in the conflict. Russian ships played a role in attacks on the Ukrainian coastal city of Mariupol, allegedly conducting amphibious landings on the coast. Additionally, in a widely-publicized incident, a Russian destroyer opened fire on Ukraine’s Snake Island after its Ukrainian defenders profanely refused a demand for their surrender. The Ukrainian defenders were initially reported to have been killed, but it later emerged that they had been captured and were being held as prisoners of war.

Turkey has attempted to maintain a nuanced position on the conflict, criticizing the ongoing war in Ukraine without directly antagonizing the Kremlin. Turkey has refused to participate in the international sanctions regime against Russia. However, it did describe the conflict as a “war” on Monday, rather than a “Russian military operation,” the Kremlin’s preferred phraseology.