Remember that Russian Submarine that Probably Violated the Montreux Convention? It’s Back. 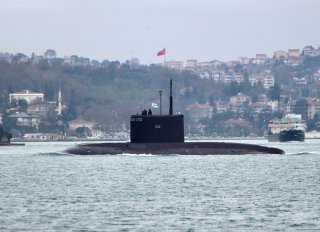 A Russian Kilo-class submarine, thought to be the Krasnodar, was seen in the English Channel, apparently en route to St. Petersburg—not an uncommon move for Russian vessels.

Where was it coming from though? From Syria and back from an apparent violation of the Montreux Convention. The Convention is a nearly ninety-year-old agreement that gives Turkey controls of the Bosphorus and the Dardanelles and gives Russia special concessions (and restrictions) in the Black Sea.

This isn’t the first time the submarine has been involved in controversy. Last spring, the submarine was photographed transitioning through the Bosporus Strait from the Black Sea towards the Mediterranean. Just last month, open-source intelligence spotted the same submarine in the Mediterranean, off the coast of Cyprus. Questions were raised about the legality of the trip, which you can read about here.

Ships and submarines that transition through the Bosphorus and Dardanelles are subject to the Montreux Convention, which has regulated the body of water since 1936, though the laws that govern specific vessel classes can be significantly different, depending on the vessel’s size and purpose.

Submarines, in particular, are subject to stringent passage rules. The Turkish Ministry of Foreign Affairs states that “only submarines belonging to riparian states can pass through the Turkish Straits, for the purpose of rejoining their base in the Black Sea for the first time after their construction or purchase, or for the purpose of repair in dockyards outside the Black Sea.”

If the Montreux Convention is indeed ripped to shreds (if not in fact then, at the very least, in spirit), then Russia could in effect have a number of powerful submarines available to enter the Mediterranean and shift the balance of power in Moscow’s favor—at a potentially high cost to the United States and other North Atlantic Treaty Organization countries who adhere to the Convention’s terms.

Turkey stands to lose the most in this scenario. Traditionally the Turks have controlled both the Bosphorus and the Dardanelles, while leaving the Black Sea a primarily Russian domain. This may no longer be the case—watch this topic closely for new developments.