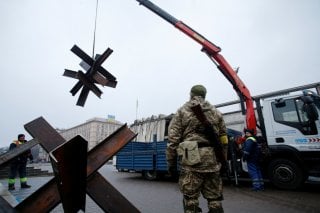 In the Ukrainian city of Lviv, furniture maker Tarass Filipchak has been using his metalworking skills to aid in his country's defense. He is one of dozens of Ukrainians across the country with welding skills that are now producing "Czech hedgehogs," an anti-tank obstacle that was first developed before the Second World War.

The large steel obstacles resemble a massive child's toy jack. Because they maintain their function even when tipped over, Czech hedgehogs have proven effective at stopping tanks and other vehicles from penetrating a line of defense.

"We couldn't imagine that we would ever do this. We are peaceful people, humanists," Filipchak told the French news agency AFP, adding that he and others went online and used Wikipedia to determine how to make the anti-tank obstacles.

AFP shared images of the efforts to mass-produce the anti-tank obstacles on social media. Filipchak has since shared his plans to make the Czech hedgehogs on Facebook and Instagram.

When the group making the anti-tank defenses ran out of steel, they began using old railroad tracks. So far, they have produced some 100 hedgehogs that will be used to help fortify Lviv and other Ukrainian cities.

In Kyiv, antique Czech hedgehogs were even brought out from a museum exhibit and placed at a roadblock to stop Russian military vehicles.

Developed to Stop a Nazi Invasion

As Russian Federation president Vladimir Putin claimed that Russia’s intervention is in part a "denazification" mission, there is some irony that the Czech hedgehog was first developed to counter a feared invasion from the Nazis. The initial Czech hedgehogs didn't stop the Nazis, as Czechoslovakia was forced to accept the German occupation of the Sudetenland as a consequence of the Munich Agreement.

The initial design was made of reinforced concrete. However, those proved ineffective during tests, as it was found that they could be damaged by artillery blasts and even machine gun fire. The debris also provided cover for attacking infantry forces. Steel was found to be a better material because small arms fire could do little damage to them and artillery blasts simply launched the jack-shaped obstacle into the air.

However, unlike more permanent defenses, including the so-called "dragon's teeth" that Germany developed and employed along the Siegfried Line, the Czech hedgehogs are only effective if they are actively defended. Otherwise, they're a minor obstacle that can be lifted, towed, or even rolled out of place.

Making Czech hedgehogs is just one of the many low-tech ways that Ukraine’s urban centers are being fortified to slow, if not stop, the Russian invasion. The simple metal barriers can easily block an entire street. Anything that can slow a tank or other vehicle down will make it vulnerable, even if only for a few seconds, and that could provide enough time for the resistance to strike.