The Ultra-Stealthy B-21 Raider Is Headed for Test Flights 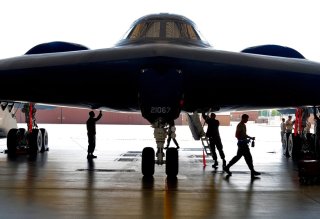 The Air Force’s sleek, new B-21 Raider stealth bomber is quickly being prepared for its first flight to test the aircraft’s flight capabilities, landing gear, and mission systems.

Expectations for the new bomber are quite high, as the mostly secret program has remained on time and on budget for several years now, something which Air Force senior weapons developers explain is the result of deliberate measures to ensure steady requirements and a codified technical baseline.

“We have codified the approach that capitalizes on the attributes of the mission systems and kept stable requirements. Owning the technical baseline has helped so we are not stuck in proprietary systems. We have codified the roadmap for requirements and a roadmap for research,” Gen. Tim Ray, the former commander of Global Strike Command, told The Mitchell Institute for Aerospace Studies last year.

The entire modernization strategy for the Air Force’s B-21 is based upon the use of a common set of technical standards, internet protocols, and interfaces to ensure that software upgrades, new weapons systems, and other enhancements can be integrated quickly without having to rearchitect major parts of the platform.

“Our roadmap for research ensures that we won’t need to come back for a new radio, new system or new part of the bomber. You can move quickly,” Ray said.

For instance, Ray explained that the JASSM-ER (Joint Air-to-Surface-Standoff-Missile), a critical weapon system for the B-21, was integrated about ten times faster than would have previously been possible.

The concept is to not only deliver a paradigm-changing capability but also ensure that the platform can continuously evolve, adapt, modernize, and improve as new sensors, weapons, electronics, and computing become available in coming years. Part of the intent is to avoid “block” upgrades set apart by many years and instead pursue a steady, incremental series of ongoing improvements as technology evolves.

Engineering the platform to increasingly operate a group of unmanned systems is integral to this process, as new drones, sensors and networking technologies will continuously arrive in coming years. With a baseline technical infrastructure and sufficient interface, new drones can be integrated into the communications protocol through common standards to allow the platform to operate a growing number of unmanned systems, process information at the point of collection, and ensure seamless, high-speed connectivity.

“We are assessing the potential to introduce a lower cost, complementary, uncrewed aircraft into the B-21 to provide an enhanced level of capability,” Undersecretary of the Air Force Gina Ortiz told reporters at the announcement of the service’s 2023 budget request.

This plan accounts for a portion of the reason why Air Force leaders describe the new bombers as a platform that will introduce innovative technologies into the force. While details are of course not available for security reasons, the B-21 is reported to incorporate an entirely new generation of stealth technology. For this and other reasons, senior Air Force leaders have for many years now said the B-21 will be able to hold any target at risk, anywhere in the world—at any time.