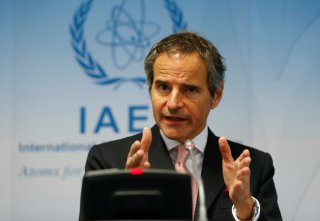 A team of inspectors from the International Atomic Energy Agency (IAEA) is set to arrive at the Zaporizhzhia Nuclear Power Plant (NPP) later this week.

“The day has come,” tweeted IAEA Director General Rafael Grossi, adding that the inspection team “is now on the way.” The mission will “assess physical damage [to the plant], determine functionality of safety and security systems, evaluate staff conditions, [and] perform urgent safeguards and activities,” according to a statement by the IAEA.

Grossi’s announcement came on the heels of weeks of tense negotiations, with Russia and Ukraine accusing one another of stonewalling the international community’s efforts to give nuclear inspectors access to the Zaporizhzhia NPP.  Mikhail Ulyanov, Russia's permanent representative to the international organizations in Vienna, told Russian state media that the IAEA intends to leave some of its fifteen-strong team at the plant on a permanent basis, according to Reuters. Kremlin spokesman Dmitry Peskov said on Monday that the IAEA mission will enter the plant, which is occupied by Russia, from Ukrainian-controlled territory.

“We expect from the mission a clear statement of facts, of violation of all nuclear, of nuclear safety protocols. We know that Russia is putting not only Ukraine, but also the entire world at threat at the risk of nuclear accident,” said Ukrainian foreign minister Dmytro Kuleba.

Russian forces captured the southeastern Ukrainian city of Enerhodar, where the plant is located, in March. The Zaporizhzhia NPP, which supplies power to swathes of southern and central Ukraine, has continued to operate at reduced capacity under Russian control.

Moscow has accused Ukraine’s armed forces of repeatedly striking Enerhodar and the Zaporizhzhia power plant, with Russia’s Defense ministry warning that it may have to shut down the plant if the purported attacks continue. “We still believe that all the countries should keep pressing Ukraine to stop jeopardizing the European continent by shelling the premises of the Zaporozhye NPP and areas around it,” Peskov said. Experts have warned that reports of attacks at and near the plant put Europe at heightened risk of nuclear catastrophe.

Kyiv officials blamed the attacks in the vicinity of the plant on Russia. “They [Russian forces] use it [the power plant] like a shield against the Ukrainian forces, because nobody from Ukraine is going to do something,” said Ukrainian energy executive Petro Kotin earlier this month. Ukrainian President Volodymyr Zelenskyy said in an address that the Ukrainian military will target Russian soldiers who shoot at Ukrainian troops  “under cover of the [Zaporizhzhia] plant.” Zelenskyy and senior Kyiv officials said the Zaporizhzhia NPP can only be secured with the full withdrawal of Russian forces and the restoration of Ukrainian control over the territory.