Will Fighting at Zaporizhzhia End in Nuclear Catastrophe? 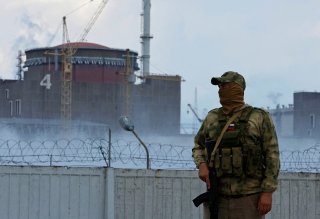 Officials are racing to stave off what experts and watchdogs have characterized as the mounting threat of nuclear catastrophe at the Zaporizhzhia Power Plant.

The Zaporizhzhia Power Plant (NPP) in southeastern Ukraine was reportedly shelled again on Thursday, with Russia and Ukraine trading renewed accusations over the alleged attacks. “Five [hits] were recorded near the plant management’s office – right next to the welding site and the storage facility for radiation sources. The grass caught fire over a small area, but fortunately, no one was hurt,” the Ukrainian state-run company operating the plant, Energoatom, said.

Kyiv officials have accused Russian forces of firing rockets from positions near the plant under the calculated assumption that it would be too risky for Ukraine to return fire. “They [Russian forces] use it [the power plant] like a shield against the Ukrainian forces, because nobody from Ukraine is going to do something,” said Ukrainian energy executive Petro Kotin.

Ukrainian president Volodymyr Zelenskyy, who previously said Russian forces are engaging in “nuclear terrorism,” demanded that Russia turn control of the plant over to Ukraine. “Only the complete withdrawal of Russians from the territory of the Zaporizhzhia nuclear power plant and the restoration of Ukraine’s full control over the situation around the plant will guarantee the restoration of nuclear safety for all of Europe,” he said. The Zaporizhzhia plant fell under Russian control in early March. The Ukrainian technicians there have continued to operate the plant at reduced capacity.

Grossi warned that it is vital to guarantee the availability of off-site power to the Zaporizhzhia facility. Experts said that continued shelling could critically damage the facility’s infrastructure and possibly trigger an explosion. “Reactors [need] to be constantly cooled by water passing through [them,]” physicist MV Ramana told Al Jazeera. “If that water stream is cut out, cut down, cut off in some fashion, then the reactor could lose cooling, the fuel will start melting. It will sort of create high pressure, and the thing can explode.”

The Kremlin, which blames Kyiv for what it describes as relentless Ukrainian attacks against the plant, said it welcomes an IAEA mission to gather information on the reported strikes. “The Russian military’s ongoing control over the Zaporozhye NPP is a key to nuclear security in the region, it’s obvious. The IAEA sees the need to send a mission to the Zaporozhye NPP and Russia is ready to provide full assistance, which has been made clear. However, Ukraine must stop its attacks on the nuclear facility,” Russian lawmaker Leonid Slutsky wrote on Telegram. The Russian side claims Ukraine is acting in bad faith, pointing to Kyiv’s alleged refusal to enter into a trilateral agreement with the IAEA.

Moscow officials have accused both Ukraine and the UN of obstructing the IAEA from conducting an investigation at the Zaporizhzhia NPP. “We were able to solve all the difficult issues related to organizing and conducting a visit of this kind. However, at the very last moment, the UN general secretariat turned on the red light, canceling the visit,” Russia’s Permanent Representative to the UN Vasily Nebenzya said on Thursday. Nebenzya’s Ukrainian counterpart Sergiy Kyslystsya has countered that Moscow is the one sabotaging a prospective IAEA visit with its “unjustified conditions,” reiterating Zelenskyy’s demanding for Russian forces to withdraw from the area.

The UN put forth a proposal on Thursday to turn the Zaporizhzhia NPP into a demilitarized zone. UN officials did immediately share details surrounding the plan, including how exactly the demilitarized zone will be demarcated and enforced. The White House has backed the proposal, adding that the demilitarized zone should be controlled by Ukraine. “Fighting near a nuclear plant is dangerous and irresponsible – and we continue to call on Russia to cease all military operations at or near Ukrainian nuclear facilities and return full control to Ukraine, and support Ukrainian calls for a demilitarized zone around the nuclear power plant,” said a State Department spokesperson.

Russia has rejected the demilitarization proposal, with Nebenzya arguing that it would create a potential security risk. “Demilitarizing the (nuclear) power station could leave it vulnerable to anyone willing to pay a visit. Nobody knows what these potential visitors would be after. We can’t rule out some sort of provocations or terrorist attacks against the power station – which we ought to safeguard,” he said.

The Institute of War assessed earlier this month that Russia is playing up the specter of a nuclear disaster in Zaporizhzhia “to degrade Western will to provide military support to a Ukrainian counteroffensive.” Meanwhile, Kyiv has capitalized on the Zaporizhzhia NPP conflict as part of its broader message that the international community has a vested interest in ensuring Ukraine’s victory. “This is a global interest, not just a Ukrainian need,” said Zelenskyy about returning the Zaporizhzhia plant to Ukrainian control.

With neither side signaling a willingness to back down, the standoff at the Zaporizhzhia NPP risks becoming one of the Ukraine War’s most dangerous flashpoints. “Regrettably, instead of de-escalation, over the past several days there have been reports of further deeply worrying incidents that could, if they continue, lead to disaster,” said UN chief Antonio Guterres.