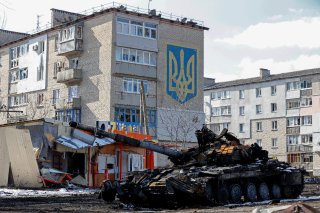 The United Nations (UN) approved a resolution on Monday calling for Russia to be held accountable for its conduct in Ukraine. The resolution said Russia must pay reparations for causing widespread damage to Ukraine, sparking anger and condemnation from the Kremlin.

The resolution passed 94-14 with 72 abstentions, marking what the AP described as the “lowest level of support received by any of the five Ukraine-related resolutions adopted by the General Assembly since Russia’s Feb. 24 invasion of its smaller neighbor.”

The measure recognized “the need for the establishment of an international mechanism for reparation for damage, loss or injury arising from the Russian Federation’s internationally wrongful acts.”

Russian ambassador to the UN Vassily Nebenzia argued the resolution constituted an “illegal expropriation of a third country’s sovereign assets,” characterizing it as a ploy to grant “some semblance of legitimacy” to what he described as the West’s plan to seize “hundreds of billions of dollars” in frozen Russian assets. The resolution’s critics, including China, Venezuela, and Eritrea, argued it establishes a “dangerous precedent” and that the UN Assembly is not a judicial body with the power to define “internationally wrongful acts.”

The UN measure elicited swift condemnation from Moscow. Kremlin spokesman Dmitry Peskov accused the West of seeking to “formalize robbery.” Former Russian president and Deputy Chairman of Russia’s Security Council Dmitry Medvedev caustically called on the UN to extract reparations from the United States. "They should adopt the same recommendation on total reparation of the damage inflicted by the United States on Korea, Vietnam, Iraq, Yugoslavia and many other countries that suffered from the Americans and NATO," he wrote on his Telegram channel, according to Russian state news outlet TASS. Otherwise, he added, "it looks like the beginning of the United Nations’ agony as a key international institution for reconciliation.”

Ukraine’s ambassador to the UN, Sergiy Kyslytsya, accused Russian forces of targeting wide swathes of civilian infrastructure. "Ukraine will have the daunting task of rebuilding the country and recovering from this war, but that recovery will never be complete without a sense of justice for the victims of the Russian war. It is time to hold Russia accountable," he said, according to Reuters.

Ukrainian president Volodymyr Zelenskyy welcomed the resolution, calling for additional steps on the part of the international community to hold Russia accountable. “The reparations that Russia will have to pay for what it has committed are now part of international legal reality,” he said in a nightly video address on Monday.  “We are still discussing the second resolution with our partners; it concerns the establishment of a special tribunal for the crime of Russian aggression against Ukraine. We will do everything to ensure that both of them are implemented.”