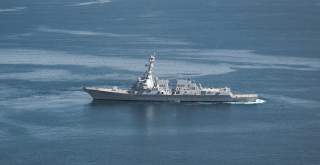 The ongoing deployment of high-profile missile systems in disputed zones across the South China and the diplomatic sabre-rattling surrounding them can obscure the subtle, but no less consequential means employed by the great powers to consolidate their military presence in the Pacific region.

The use of unmanned stealth vessels in the Pacific briefly became a topic of heated international discussion in December 2016, when China’s People’s Liberation Army Navy seized an American underwater surveillance drone that was about to be retrieved by sailors from the USNS Bowditch. The US lodged a formal protest for the drone’s return as a “sovereign immune vessel of the United States,” a demand to which China eventually acceded.

That particular standoff was defused, but the underlying issues remain unresolved and are increasingly resonant in a climate of slow but steady escalation between Washington and Beijing. China has actively sought to diversify its military presence in the Pacific with a wide range of low-intensity reconnaissance and surveillance tools, a trend no better exemplified than by its “SeaFly-01” unmanned stealth vessel.

The SeaFly project began well before the December 2016 incident, in 2014. The vessel was conceived with an export focus, and is therefore made to order. This means that there are no concrete specifications, though the average model should be within the range of 10 meters in length and 4 meters in beam, while weighing around 4 and a half tons according to a Jane’s Intelligence Review Report.

The hull is constructed with a lightweight, radar-absorbent composite material, and the vessel can carry a payload of 1.5 tons. It is powered by unspecified twin 380-horsepower waterjets. SeaFly is capable of speeds up to 45 knots, with an endurance of up to 400 km from the full 700-liter fuel tank.

In keeping with its reconnaissance purpose, SeaFly comes outfitted with a formidable suite of surveillance gear: an onboard Beidou satellite navigation and communication system; sonar radars; electro-optical and infrared imagers; and the ability to act as a launching pad for smaller drones.

Conversely, it is able to recover unmanned aerial vehicles (UAV’s). But recovering UAV’s while rolling with the waves is risky without human input, a challenge that the manufacturer, Sifang, overcame with the use of advanced algorithms to account for the vessel’s seaborne motion patterns: “These algorithms enable the SeaFly to assess the immediate sea conditions, predict how it will react to wave motion, and generate the optimal return path for the UAV with a high degree of success,” Sifang explained to Jane’s.

It is unclear whether all these features come in a bundle, or can also be made to order like the ship’s dimensions. In any case, China has a large degree of manufacturing control over SeaFly because all of its components are indigenously produced according to Sifang engineer Liu Fei: "All the core equipment was developed by us, and the localization rate is 100 percent."

The first SeaFly units were launched in 2016, though testing is still ongoing. Earlier reports indicated that SeaFly’s use case is small-scale operations like shadowing other vessels and scanning for drones, but a 2018 sighting showed what appeared to be 56 of them being tested in formation. There are several instances where a large group of these unmanned vessels could be effective: minesweeping, mass electronic countermeasure (ECM) operations, and certain combat missions, though their combat capabilities remain unclear.

While Navies are unlikely to be fully unmanned any time soon, a continuous stream of incremental advancements in artificial intelligence is making drones more viable in certain kinds of Naval operations. China’s SeaFly demonstrates that the ground is especially fertile in the realm of surveillance and reconnaissance.