The United States and Australia Are Stepping up Naval Cooperation 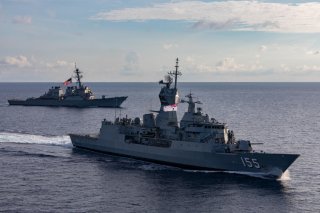 The United States and Australia held a high-level dialogue on how to cooperate for better interoperability in the Indo-Pacific.

The meeting revolved around how to get the most out of the American and Australian relationship from a naval perspective.

"Our capacity expands when we sail in company and operate with like-minded navies across the globe,” said Merz. “A key ally like Australia is critical to enhancing our joint capabilities and interoperability in the Indo-Pacific region. That includes traditional maritime security and stability, as well as emerging areas of importance like cyber and artificial intelligence.”

The Navy press release explained in a bit more detail that “broadly speaking, the framework aims to strengthen existing cooperation, address mutually strategic issues, and promote collaborative development and utilization of science and technology between both navies.”

The move came as tensions in the Indo-Pacific are ratcheting up. China is on a shipbuilding spree, and the latest estimates place their ships at around 355 in number. And while the United States is slowly building up its naval forces, their pace does not match the Chinese—a strong incentive to join forces with the Australians.

The Australian Navy is a newcomer to nuclear technology. Despite holding an estimated 33 percent of the world’s uranium deposits, the continent has never hosted a nuclear power station, largely thanks to abundant coal reserves.

The U.S. has long been a vital partner in ensuring a free and open region in which we and our neighbors can prosper,” Rear Admiral Chris Smith said.

Regarding the joint naval dialogue, the Royal Australian Navy said the following: “These talks, although not face to face, provide an opportunity to build on that relationship, which forms the basis on which we can work together to build a stronger and more stable region.”