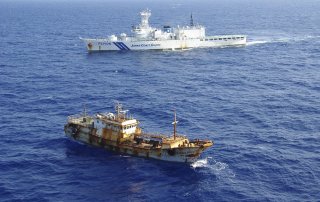 The People’s Republic of China (PRC) has the world’s largest distant water fishing fleet in the world, and China along with Taiwan represents nearly 60 percent of all global distant water fishing (DWF) efforts in other countries’ waters from 2015 to 2017. By comparison, the DWF of Japan, South Korea and Spain each represented 10 percent, while the U.S. DWF fleet was the world’s sixth-largest fleet and accounts for just 1.4 percent of the global effort.

A new report from the U.S. Coast Guard called on the international community, DWF states, coastal nations and the fishing industry to collectively improve transparency and accountability for DWF fleets. It also suggested that these nations and the industry take the necessary steps to safeguard global fisheries for future generations.

The report specifically called out the PRC and noted the National Oceanic and Atmospheric Administration (NOAA) 2019 biennial Illegal, Unreported and Unregulated (IUU) Fishing Report to Congress identified a troubling expanse of “alleged violations” conducted by Chinese-flagged fishing vessels. These included illegal fishing in foreign exclusive economic zones (EEZs) of coastal states worldwide from the Western and Central Pacific to the coasts of Africa and even South America. The 2019 IUU Fishing Report also raised serious concerns over the number of stateless fishing vessels in the Northern Pacific that displayed characteristics of Chinese registration.

“The U.S. Coast Guard will shine a light on the activities of those who violate international rules-based order, exposing and holding accountable the most egregious predatory actors,” the reported stated.

It is easy to see why the PRC could be considered amongst those egregious actors.

In total there are believed to be around seventeen thousand PRC fishing vessels and more than twelve thousand of them from operating in non-Chinese waters. The South China Morning Post (SCMP) also reported that a June report by the London-based Overseas Development Institute named China as the largest contributor to a “global fisheries crisis” because of its distant fishing fleet.

In August, Ecuador’s navy reported the presence of a massive Chinese fishing fleet totaling more than 340 vessels that were operating near the Galapagos Islands, potentially impacting the fishing in the area around the ecologically sensitive islands. While such fishing is not illegal as it takes place in international waters, environmental activists have expressed concerns over the size of the fleet, which takes advantage of the abundant marine species that spill over from protected waters.

The U.S. Coast Guard has called upon China to exercise more responsible flag state control over its vessels, including its DWF, but also demonstrate that it taking the necessary steps to ensure compliance with international norms and governance structures.

The report also didn’t rule out any cooperation with China, and some progress has been made by Beijing. In July, the PRC’s Ministry of Agriculture and Rural Affairs banned Chinese vessels from fishing squid in parts of the Pacific and Atlantic to allow the depleted populations to have time to recover. This three-month moratorium actually marked the first time Beijing had issued such a ban on its fishing fleets from operating in international waters—but whether all the vessels will heed the ban is another question.

The other noted concern raised in the Coast Guard’s report was the PRC’s People’s Armed Forces Maritime Militia, (PAFMM), which is estimated to include more than three thousand vessels. It has been accused of actively carrying out aggressive behavior on the high seas and in the sovereign waters of other nations at the behest of Beijing to coerce and intimidate legitimate fishers. Its efforts have been conducted in the support of the Chinese Communist Party’s long-term maritime strategic goals in the South China Sea and even the Indian Ocean.

The U.S. military has only taken note of the PAFMM in recent years, but it has been seen as a threat that could erode U.S. and allied interests by operating surreptitiously in a “gray zone” between peace and war. This is why the U.S. Coast Guard has been increasingly asked to share the burden of maritime policing, presence, and security cooperation in the Pacific region and they have long supported those missions in other waters as well.

Clearly, the growing concern is more than just the “catch of the day.”