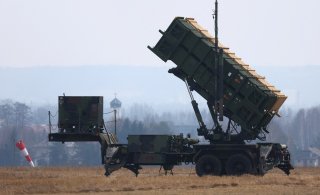 The Department of Defense has deployed two batteries of Patriot missile systems to Poland. The deployment is intended to enhance the defense of Poland, a NATO ally of the United States.

“Patriot batteries that we moved into Poland and any other air defenses that we might be contributing to in Poland are purely defensive in nature,” Department of Defense spokesman John Kirby said on Monday. “Defensive in nature over NATO airspace and NATO territory.”

Patriot missiles were first deployed in the 1980s but were made famous by their ability to intercept Scud missiles launched by Iraq during Operation Desert Storm. The missile system has been substantially modernized over the years and is a foundational element of American missile defense.

The deployment bolsters Poland’s defense as Russia’s invasion of Ukraine continues. Poland and Ukraine share a lengthy border, and some Russian air and missile strikes have hit targets near Poland in western Ukraine.

“I won't speak for Poland, and that government,” Kirby said. “But for our purposes, the military capabilities that we are adding to NATO's eastern flank are designed to protect and defend and deter against attacks on NATO territory that includes NATO airspace.”

The most modern variant of the system is the Patriot Advanced Capability 3. The system was also integrated with Missile Segment Enhancement missiles. The Patriot radar has also received upgrades to help connect it to other air defense systems. These updates have greatly improved tracking and targeting capability to improve its ability to destroy cruise missiles, which follow a different trajectory than the parabolic trajectory of ballistic missiles.

“We had multiple Patriots, multiple targets, and multiple interceptors,” said Army Brig. Gen Brian Gibson in 2020. “We executed the plan we structured to success.”

According to developers, the intercept took place at high speeds and was made possible by a new generation of networking technologies that enabled multi-node target data transmission.

“Not only did we have multiple sensors and multiple shooters but also multiple echelons,” Gibson said. “We used a battalion in a way we normally wouldn’t, using multiple relays configured in a tactical formation. By adding those additional sensors to the network, we added several minutes to the decision cycle. Commanders can then actually know how many interceptors to launch at a target.”