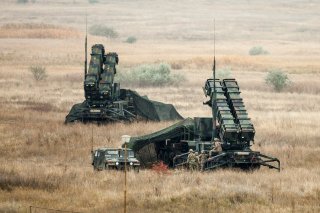 Here's What You Need To Remember: The Army’s tactical and strategic goal, Murray often says, is to advance the multi-domain capable characteristics of IBCS to, not just network ground-based Sentinel, Patriot and THAAD radars but also incorporate other assets such as F-35s, drones and even surface ships.

The U.S. military recently conducted a live-fire target “intercept” of a mock enemy cruise missile with a Patriot missile. The missile defense demonstration resulted in a sizable explosion, as the cruise missile was hit and destroyed while flying over the desert at the White Sands Missile Range in New Mexico.

“We had success… 2 for 2,” Army Future Command Commander General John Murray told reporters following the intercept, before continuing to explain that the test used “multiple sensors, multiple shooters and a command and control system that identified the threat and passed the track to the right shooter.”

These successful hits had been years in the making, marking a milestone in new applications of multi-domain, networked air and missile defense. The live-fire test took place as part of a Limited User Test for the Army’s emerging Integrated Battle Command System (IBCS), a “meshed’’ network of otherwise disparate or separate sensor “nodes” now able to quickly feed target data into a single system.

IBCS, Murray often explains, is grounded in this premise of connectivity between multiple radar systems, air defense sensors and “shooters” (interceptor weapons) able to receive the target track and take out a threat.

“Right now, if a defense system is a Patriot missile, you have a Patriot radar. If it’s a THAAD (Terminal High Altitude Air Defense), it has a TPY-2 THAAD radar. We’ve got several radars for different systems. IBCS brings the ability to take any sensor and link it to just about any air defense system to include some of our artillery sensors and counterfire sensors,” General John Murray, Commanding General of Army Futures Command, told The National Interest in an interview earlier this year.

Hitting maneuvering, low-altitude cruise missiles also represents a step forward as it naturally calls upon a need for radar data and threat information from divergent angles and points of view to share target data in real time.

Gibson went on to explain that the Army’s Test and Evaluation Command would be analyzing data from the test for up to three months to “make sure we have learned everything we can.”

“Not only did we have multiple sensors and multiple shooters but also multiple echelons. We used a battalion in a way we normally wouldn’t, using multiple relays configured in a tactical formation. By adding those additional sensors to the network, we added several minutes to the decision cycle. Commanders can then actually know how many interceptors to launch at a target,” Gibson said.

The Army’s tactical and strategic goal, Murray often says, is to advance the multi-domain capable characteristics of IBCS to, not just network ground-based Sentinel, Patriot and THAAD radars but also incorporate other assets such as F-35s, drones and even surface ships.