The United States Has Nothing Like China's GJ-11 Drone 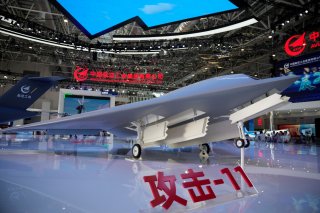 China plans to unveil an underneath look at the internal weapons bay on its Gongi-11 (GJ-11) stealthy attack drone, an armed, unmanned platform that first emerged at a Chinese parade in 2019. The drone is a weapon possibly intended to rival or exceed the U.S. stealthy RQ-170 Sentinel or armed MQ-9 Reaper drones.

While initial images of the Chinese drone appear to be a possible design “rip-off” of several U.S. platforms, available photographs only show the top of the aircraft. The areas under the wings were not previously visible, which led many to speculate about whether the drone had an internal weapons bay.

The answer to that question appears to be yes, according to a report by the Chinese-backed Global Times, which states that China will, for the first time, offer a public look at the drone’s internal weapons bay underneath the aircraft.

“China’s GJ-11 stealth armed reconnaissance drone will open its weapons bays for the first time and display its capability to carry a large number of precision weapons at the Airshow China 2021,” the Global Times reported. The GJ-11 will reportedly be on display at the air show alongside the well-known Chinese J-20 stealth fighter jet and Y-20 large cargo plane.

Made by a Chinese company called AVIC, the GJ-11 is reported by the Global Times as having two weapons bays between the drone’s landing gear. Each bay, the report says, has four bomb locations and what appear to be guided precision air-to-ground bombs.

A stealthy armed drone such as this, able to carry and fire glide bombs, or precision-strike air-to-ground missiles may not yet have an operational U.S. equivalent, despite appearing to be modeled after several U.S. stealthy aircraft designs. The new Chinese GJ-11 might bring a rare blend of attributes not likely to be matched by other countries. Many countries have armed stealth fighters, but for most countries, armed stealth drones have not fully emerged.

The United States operates several strike drones such as the less-stealthy MQ-9 Reaper. But available info on the stealthy RQ-170 suggests that it is unarmed. It can be difficult to optimize a blend of what might be tough-to-combine characteristics, as weapons pylons or weight and size-adding internal weapons bays can make the engineering of a super stealthy platform more challenging. While the United States is pursuing a stealthy armed LongShot attack drone with the Defense Advanced Research Projects Agency (DARPA) and the defense industry, the RQ-170 is not armed. The B-2 Spirit stealth bomber has some of these characteristics but differs in the fact that it is manned. In fact, the Chinese newspaper specifically says the GJ-11 configuration resembles a “flying wing design similar to the United States’ B-2 strategic bomber.” This is by no means a surprise, as China has a well-known and documented history of designing what appears like U.S. design copycat efforts or rip-offs.