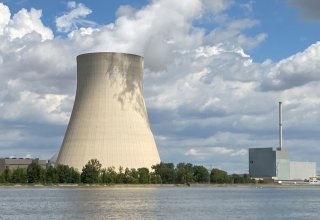 Despite Borat's claim that Kazakhstan is “number one exporter of potassium,” it actually holds a far more concerning position as the largest supplier of U.S. uranium. This is a problem, as Kazakhstan's government is not “very nice,” but a one-party state under authoritarian rule.

Kazakhstan faces civil unrest and the threat of Russian invasion—the former which caused uranium prices to surge earlier this year, and the latter which could drive them even higher if Russia were to control Kazakhstan's uranium, which constituted 45 percent of the world's total supply in 2021.

As evidenced by the energy crisis caused by Germany's decision to shut down its nuclear plants and import nearly half of its natural gas from Russia, relying on authoritarian regimes for energy is dangerous. In order to secure our clean energy future, the United States must wean itself off of foreign uranium and produce more of our own domestically.

The United States imports more than twice the amount of uranium from Kazakhstan (35 percent) as it does from Russia (14 percent), its third largest supplier, and seven times more than it produces domestically (5 percent). The United States also imports all of its High-Assay, Low-Enriched Uranium (HALEU)—uranium enriched beyond the typical 5 percent, used exclusively by advanced reactors like small modular reactors—from Russia, the only country that currently produces HALEU. The U.S. decision to allow nearly half of its uranium to come from authoritarian regimes was driven both by a drop in uranium prices and the push to close domestic plants for environmental reasons.

Native American communities like the Navajo are one key opponent of domestic uranium production. Their opposition is understandable: uranium mines on their lands were poorly regulated and caused many serious health problems for Navajo communities. Yet uranium mining is far safer now than it was when mining was conducted on Navajo lands from 1944 to 1986—a period of time in which safety concerns surrounding radiation and dust control weren't taken seriously.

By working alongside Native American communities to ensure that uranium mining today is not the same as it was nearly a half-century ago, we can safeguard indigenous communities from harm while also ensuring American energy security through a strong domestic uranium production base.

There is progress being made to reinvigorate our domestic uranium production capability for both traditional uranium and HALEU. The Inflation Reduction Act provides $700 million for domestic HALEU production and a $15 per megawatt-hour tax credit for electricity produced by existing nuclear plants. While this is a strong step in the right direction, there is far more that must be done. Take Senator John Barrasso's proposal to establish a strategic uranium reserve to boost domestic production, for example.

In addition to banning Russian uranium imports altogether, Barrasso has proposed a strategic uranium reserve that would boost domestic production by setting purchase goals for domestic suppliers. According to Barrasso, Congress appropriated $75 million to the Department of Energy to establish one in 2020, yet it hasn't made any domestic uranium purchases since.

The National Nuclear Security Administration's initial purchase goal of 1 million pounds of uranium is an important milestone and would do a great deal in both spurring domestic production and securing America's uranium supply for the future. We must prioritize building a strategic uranium reserve not least because our adversaries already have them. China is estimated to have 74,000 tons of uranium in its reserve, which has been growing since 2007.

The United States mined and enriched millions of pounds of uranium just forty years ago—there is no reason why it can't do so again. While domestic uranium production will take time to return to peak levels, it's essential that we begin the process of weaning ourselves off of foreign uranium now.

Benjamin Khoshbin is an Energy & Environment Writing Fellow with the American Conservation Coalition and Young Voices.