The United States is Upping the Missile Defense Ante in Alaska 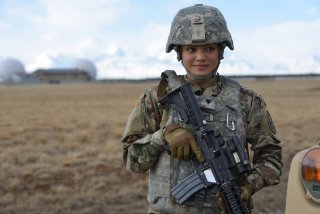 The Missile Defense Agency, responsible for the nation’s missile defense, has announced the completion of construction on the Long Range Discrimination Radar (LRDR). Based in Alaska, the LRDR is a flexible multi-mission radar array that is among the most powerful in the United States.

“Once fully operational, LRDR will provide unparalleled ability to simultaneously search and track multiple small objects, including all classes of ballistic missiles, at very long ranges, under continuous operation,” the Missile Defense Agency explained in a press statement.

“Its discrimination capability will allow it to identify lethal objects, such as enemy warheads, and differentiate them from non-lethal decoys,” per the statement. “This will increase the defensive capacity of the homeland defense interceptor inventory by conserving the number of Ground-Based Interceptors required for threat engagement. Highly adaptable, LRDR will address hypersonic missiles in future configurations.”

Several countries besides the United States have hypersonic weapons in development, notably Russia and China. And while the United States has robust missile detection and countermeasure infrastructure, the equipment is a relic of the Cold War and not optimized for hypersonic threats but rather for supersonic ballistic missiles.

“The Long-Range Discrimination Radar has finished construction, and we can now begin the testing phase that will lead to the full operational use of this vital system,” Hill said. “LRDR will allow Northern Command to better defend the United States from ballistic and hypersonic missile threats.”

The LRDR is flexible and capable of more than just tracking hypersonic weapons. For example, the MDA specifies that the radar array can also be used to track satellites in orbit around the earth and is capable of “detecting, tracking, and identifying active or inactive satellites, spent rocket bodies, and fragmentation debris.”

From the LRDR’s vantage point in Alaska, the radar can cover vast parts of the Pacific Ocean and, in theory, monitor launches from North Korea and potentially China.

Though installed, the new array is not yet operational, but first must undergo testing and further evaluation. Once the MDA completes testing in 2023, the organization will hand over operational control to the U.S. Space Force.

The Long-Range Discrimination Radar will not replace other missile tracking infrastructure already in place in the United States but will instead complement existing arrays. And while the ongoing pandemic slowed the array installation, the project is now full steam ahead—and upping the United States’ antimissile defenses in a big way.