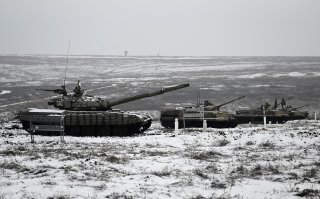 After a meeting between Russian foreign minister Sergei Lavrov and Chinese foreign minister Wang Yi in Beijing, the Chinese diplomat reportedly expressed “understanding and support” for Russia’s position in the Ukraine crisis and agreed to coordinate its positions with Moscow’s. The announcement raised concerns in the West that Russia intended to rely on increased commerce with China to offset the impact of crippling U.S. and European sanctions.

State Department spokesman Ned Price warned on Thursday that such a move would invite significant pushback from the United States. He noted that if Russia initiated a military conflict in Ukraine, China’s national interests would soon be affected as well.

“The global security and economic risks posed by further Russian aggression would be enormous and they would have consequences not only on Ukraine, Europe, [and] the transatlantic community, but on the PRC as well,” Price said, using an acronym for China’s official title, the People’s Republic of China. “If Russia thinks that it will be in a position to make up some of some of those consequences, to mitigate some of those consequences, by a closer relationship with the PRC, that is not the case. It will actually make the Russian economy in many ways more brittle.”

Price said that both the Russian and Chinese economies depended in large part on “foundational technologies” that could only reliably be imported from the Western world.

“If you deny yourself the ability to transact with the West, to import with the West from Europe, from the United States, you are going to significantly degrade your productive capacity,” he explained.

Price said that U.S. sanctions policy would employ “an array of tools” to ensure that foreign companies, including Chinese companies, that attempted to evade U.S. and European sanctions would not be able to, or would themselves become the target of sanctions.

“I wouldn’t want to speculate on what those tools are, but we do have tools that can address that, and that seek to account for that,” Price said.

While support for U.S. troops within Ukraine to prevent a Russian intervention is minimal in the United States, both Democrats and Republicans have advocated for punitive sanctions on Russia if it attempted to invade Ukraine. The details of a sanctions bill are being negotiated on Capitol Hill, and the White House and State Department each indicated that they have reached out to American allies in Europe and Asia to ensure multilateral implementation of export control measures and other sanctions.

China’s embassy in Washington pushed back against Price’s remarks. Spokesman Liu Pengyu chastised him for “creating tensions” in the U.S.-China relationship.