Unmanned Vehicles are Coming and Their Batteries Matter 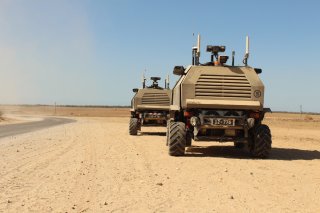 Israel is pioneering a plethora of military and defense hi-tech equipment for the future battlefield, from smart munitions and artificial intelligence to drones and defense systems for tanks. One of the weapons of the future that will accompany infantry and ground forces into battle will be unmanned vehicles. Pairing these vehicles and figuring out how best they will be used is a challenge for militaries that have access to this technology. However, they are beginning to appear more frequently in Israel and other countries.

Like any new platform or system, whether the first tanks in World War I or the first planes, trying to get new platforms to the next level is what matters. No one wants a few exotic systems, like those stealth helicopters used on the Bin Laden raid. Militaries want systems that have broad applications and solutions that can be incorporated to increase lethality or decrease casualties.

Towards that end, one Israeli company named Epsilor is a pioneer in battery technology. Their COMBATT 6T Li-Ion battery has been integrated into the new Israeli Defense Force (IDF) Jaguar Autonomous Ground Vehicle. The company sees demand for energy sources for tactical robots that will give them longer use time with batteries that meet the right weight requirements. In a statement from the company in May 2021 they noted that “the COMBATT lithium-ion 6T NATO-standard batteries of Epsilor, a globally recognized manufacturer of smart batteries and chargers, were integrated into the ‘Jaguar’ autonomous ground vehicle (AGV), which has been recently unveiled by the Israeli Defense Forces (IDF).”

The Jaguar is described as a military “robot.” It was developed by IAI’s Elta systems and will be deployed by the IDF. The statement says the deployment will be on the Gaza border and then to other areas. Israel fought a war with Hamas in mid-May and it is not clear if the Jaguar was operational for that conflict. However, in future conflicts, such vehicles are likely to be used. “Each such military autonomous vehicle is equipped with several 6T batteries providing it with over 16kWh of energy,” the company says.

The Jaguar is designed as a combat support vehicle and needs a lot of energy to run all its systems and navigate the terrain. That means energy for remote weapon stations, communications, and sensors. Epsilor says its batteries provide the highest energy density in the 6T category of batteries. This makes them an “ideal power source for AGVs, which have tight weight and volume constraints, and are required to maneuver quickly in rough terrain.” Felix Frisch, the vice-president of marketing and sales for the company says “the potential of tactical unmanned robotic systems is immense…Ground tactical robots have passed the early development stages and are currently being evaluated in the field by many leading forces, such as the US, France, UK, South Korea, and Israel.”

Epsilor has received additional orders for batteries for autonomous vehicles and “tactical robots.” These vehicles can be used to protect borders and provide support. Israel has more than 1,000km of borders, for instance. Epsilor batteries are also on IDF tanks. The batteries were tested for a year for these new vehicles. They were put through the paces in mountains, deserts, and other areas and climates. Epsilor says the batteries are now being used on “four continents” with ten customers.

Batteries are probably the least exotic of all the machines and aspects of new unmanned systems. However, they have a key role to play. When dealing with unmanned vehicles, such as unique drones that operate indoors, one challenge is always about size and time. Small drones, for instance, sometimes have a short flight time of fifteen minutes. Miniaturizing power sources and payloads and figuring out how to squeeze more time out of the system is essential. An unmanned ground vehicle aiding troops in the field that has key sensors or brings weapons to the fight can’t just stop working halfway through the battle because of battery issues. If the infantry has to carry huge heavy batteries with them, then the whole point of having a vehicle assistant is lost. This means investing in new technologies, like batteries, is key to making unmanned systems work and achieve what they need to on the next generation battlefield.