Unstoppable: What Recent Wargames Reveal About the F-35 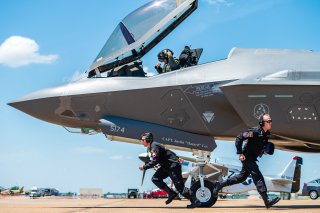 The F-35 fifth-generation stealth fighter continues to dominate every wargame it fights in.

Established in 1975, Red Flag is the U.S. Air Force’s premier air combat exercise platform. The exercises originated as a relatively simple air-to-air wargame between “red” and “blue” players but grew in complexity over the decades to encompass surveillance, reconnaissance, electronic warfare, and strike scenarios.

“The aggressor is the person who’s here to train blue by providing a realistic and robust adversary that they, being blue, have to actively fight against. They have to use every bit of the capabilities that they have and every bit of integration that they can compile to achieve what their intent is for that day,” explained F-35 pilot Col. Scott Mills. The red pilots are tasked with pushing the blue team to its limits, identifying and ruthlessly exploiting vulnerabilities as a real adversary would. “The aggressor nation here is one of the best in the world at finding those niches, finding those gaps and seams, and absolutely punishing those mistakes that blue air makes,” Mills added.

The latest Red Flag exercise, which is held multiple times annually, took place at Nellis Air Force Base in Nevada last month. An Air Force press release accompanying the exercises noted that, for the first time, F-35 stealth fighter jets will assume the role of red aggressor pilots. The Air Force decided to add F-35 jets to the red team in order to acquire a greater and more sophisticated threat than the one posed by F-16 Fighting Falcons. In doing so, the Red Flag wargames can more accurately represent the advanced capabilities of next-generation fighters like Russia’s Sukhoi Su-57 and China’s Chengdu J-20.

“The aggressors know the threat replication a little bit better, and they have studied the adversary and the way that the adversary would actually react to a specific situation,” said Lt. Col. Chris Finkenstadt, commander of the 64th Aggressor Squadron. “Based on our focus toward great power competition, we need to make sure that those guys are ready, and we do that by presenting the best possible atmosphere we can.”

The blue team had their work cut out for them, as the F-35 jet has dominated every wargame that it took part in since its major Red Flag debut in 2017. The results of those sorties were unambiguous: F-35 pilots from the 388th Fighter Wing’s 4th Fighter Squadron achieving a stunning 20:1 kill ratio while scoring direct hits with twenty-five out of twenty-seven inert weapons dropped. They did so while acting as a force multiplier for the rest of the fleet with their revolutionary sensor fusion capabilities, providing nearby friendly fighters with what one pilot called a “god’s eye view” of the battlefield. The F-35 jet registered a similarly impressive showing at Red Flag’s 2019 installments, with retired Air Force Gen. Dave Goldfein averring that the fifth-generation fighters "exceeding our expectations when it comes to not only being able to survive but to prosecute targets.”

The F-35’s track record does not end with Red Flag. A recent series of wargames found that the Block IV revision of the F-35 is one of the few active-service U.S. fighters that can play a meaningful role in repelling a prospective Chinese invasion of Taiwan.

The F-35’s track record in wargames speaks for itself. The jet has proven to be indispensable as a training platform to give the fleet a taste of what it’s like to be pitted against the cutting-edge capabilities of a fifth-generation stealth fighter.