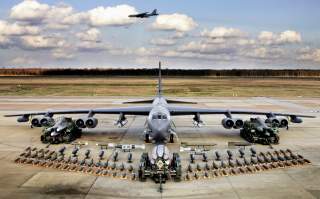 The “arsenal plane” that U.S. Air Force is developing in order to carry large numbers of munitions into battle might also carry new hypersonic weapons.

Despite other officials hinting that cargo planes could function as flying arsenals, Will Roper, the Air Force’s top weapons-buyer, seemed to lean toward equipping B-52 bombers for the role.

“If you look at our force going forward, a lot of the programs that we have are turning the bomber force into something else,” Roper said at a press event in Washington, D.C. on Nov. 12, 2019. “A B-52 with a lot of hypersonic weapons on it is, I will call it a bomber, but it's certainly not dropping things down—quite the opposite, right? It's almost a missileer instead of a bomber.”

Air Force Magazine reporter Rachel Cohen was among the first to report Roper’s comments. “Roper said he and Air Force Global Strike Command boss Gen. Timothy Ray have been moving through many reviews as the service works to put hypersonic weapons on the B-52,” Cohen wrote.

Global Strike is also exploring the idea of expanding the B-1’s weapons capacity from 24 to 40 munitions, according to an Air Force release, though the B-1 and B-2 are slated to retire in the coming decades, leaving the B-52 and the future B-21 to make up USAF’s bomber fleet.

In September [2019], Ray told reporters the B-1 could carry hypersonic weapons on its external hard points and at least four internally, as well as ferry the Joint Air-to-Surface Standoff Missile, its extended-range variant, and the Long-Range Anti-Ship Missile.

Ray told Air Force Magazine in a Nov. 13, [2019] interview that arsenal-plane experiments will take place over the next few years, and will begin to tap into the broader, networked Advanced Battle Management System idea the service is pursuing.

“Some are are pretty sensitive, some are in the formative stage,” Ray said. “We're going to tie as aggressively as we can to where the air battle management, all-domain [command and control] experimentation game plan is going on for the United States Air Force, because you have to connect everything that shoots to this sensing and this kill chain grid that's under development.”

Even before the advent of the arsenal-plane concept, the Air Force planned for the B-52, during high-end warfare, to perform a supporting role firing long-range munitions. The arsenal-plane idea merely extends the B-52’s existing operating concept and could require minimal modifications to the bomber’s sensors, communications, hardpoints and bomb bay.

“Roper indicated that what constitutes an arsenal plane may come down to how an aircraft is used, not only whether it offers a new design,” Cohen explained.

The B-52 might be ready soon, if not today, to function as an arsenal plane. But it might be a few years before the Pentagon can arm it with a hypersonic missile. The United States lags behind Russia and China in fielding super-fast munitions.

The U.S. Navy is working with the U.S. Army and Air Force on two separate but related hypersonics efforts. One to develop a booster for a Mach-5-plus missile. The other to build a common glide body for a hypersonic weapon’s second stage.

The Air Force successfully conducted a flight test of its hypersonic Air-Launched Rapid-Response Weapon back in June 2019. The test collected data on drag and vibration impacts on the weapon. But the missile didn’t carry a live warhead and wasn’t released from the aircraft.

It’s worth noting the type of plane that carried the hypersonic missile on the test flight. A B-52. The ALRRW could enter service as early as 2023.