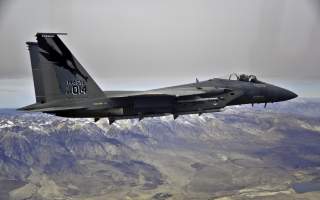 The U.S. Air Force has identified the manned fighters that, in coming years, could get robotic wingmen.

A new version of the Air Force’s F-35A stealth fighter, as well as the heavily upgraded version of the F-15 that the flying branch hopes to acquire, both could function as flight leads for the service’s Skyborg wingman drones, Will Roper, the Air Force’s top weapons-buyer, on May 22, 2019 told Defense News reporter Valerie Insinna.

Skyborg is the Air Force’s overarching program for developing fighter-style drones that can accompany manned fighters into combat while loosely under the control of a pilot in a manned fighter, a controller aboard a larger support plane or someone on the ground.

Roper confirmed that the Air Force will fold the stealthy, subsonic XQ-58 into the wider Skyborg effort. The Air Force plans to test wingman drones in 2019 and 2020 “with the hope of having an aircraft ready by 2023,” Insinna wrote.

Drone wingmen "have the potential for dramatically changing the game in the conduct of air operations," David Deptula, a former Air Force general who is now the dean of the Mitchell Institute for Aerospace Studies in Virginia, told Air Force magazine’s Rachel Cohen.

"They can bring ... more force inventory at a fraction of the cost of inhabited aircraft," Deptula added. Roper predicted that a Skyborg drone might cost “a couple million bucks,” compared to the $100-million price of a new F-35 or F-15EX.

Not coincidentally, AFRL’s work on the XQ-58 dovetails with the lab’s own Low Cost Attritable Aircraft Technology program, which aims to develop technology and processes for quickly producing large numbers of small, fighter-style drones at a cost of no more than $3 million per drone.

Both Boeing and Lockheed told Insinna their fighters can accommodate the Skyborg systems.  “For the F-35, the pathway to incorporating Skyborg would involve writing software—similar to an iPhone application—that could be installed on the jet during its Block 4 modernization phase in the early 2020s,” Insinna reported.

Prat Kumar, a Boeing vice president, told Insinna the company is in talks with the Air Force about incorporating Skyborg technology in the F-15EX.

“We are initiating early discussions with the U.S. Air Force customer on how to insert contemporary technology such as this,” Kumar said. “The F-15EX is a uniquely suited platform for such tech insertions as it has available computing capacity and space to continue offering new capabilities to the warfighter.”

The Air Force has proposed to buy 144 F-15EXs to replace older F-15Cs, starting with eight copies of the new fighter model in 2020. Congress must approve the request.

Australia, China and Japan also are working on wingman drones. In February 2019, Boeing's Australian subsidiary unveiled the so-called "Airpower Teaming System." The most striking part of that new system is a 38-foot-long, stealthy drone fighter.