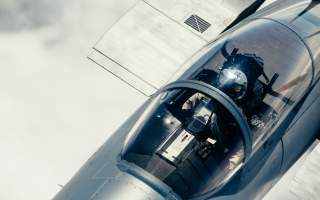 The United States and other nations worry that Russia’s sophisticated anti-aircraft missiles will deny the skies to Western aircraft.

Too bad some Russians aren’t so confident.

A Russian military expert warns that air defense missile systems, like the vaunted S-300 and S-400, aren’t all they’re cracked up to be.

The problem is that NATO can overwhelm Russia’s air defenses, argues Anatolyevich Khramchikhin, deputy director of the Institute for Political and Military Analysis.

One problem is that the United States can saturate Russian defenses with volleys of cruise missiles such as the Tomahawk and the Joint Air-to-Surface Standoff Missiles (JASSM). Moreover, surface-to-air missile (SAM) batteries in Russia’s Kaliningrad enclave on the Baltic can be destroyed by U.S. High Mobility Artillery Rocket System (HIMARS) multiple rocket launchers.

Another problem is logistical: Russian air defenses can’t fire and reload missiles quickly enough to stop a NATO air and missile offensive. “The fact that it is possible to knock down no more than one target of a single SAM, apparently, does not need to be explained to anyone,” says Khramchikhin. “This is basic arithmetic. The combat algorithms for the S-300P and S-400 imply the use of two missiles for the same target in automatic combat mode; you can only switch to the option ‘one missile - one target’ manually. That is, if the regiment has 64 ready-to-launch missiles, then it can knock down a maximum of 64 targets, or actually 32. After which the regiment is ‘reset.’ The standard for reloading one launcher for an ‘excellent’ [inspection] rating is 53 minutes. That is, it will take at least an hour to restore the regiment’s combat readiness, which is a bit much in the context of a modern war.”

But Khramchikhin doesn’t believe even an hour’s reload time is realistic. “The regiment will not be restored in an hour or in two,” because the anti-aircraft batteries don’t have enough spare missiles or the machines to reload the launchers, he explains. “All this should be brought from the bases of storage and preparation of missiles. Accordingly, we are talking about many hours, if not days. What makes the regiment, in fact, ‘one-time’ (if we are talking about a war with a serious opponent).”

In a previous article, Khramchikhin warned that air defenses east of the Ural had huge gaps, with most anti-aircraft missile batteries based in European Russia. “Given the size of the district, the extremely underdeveloped ground communications on its territory and the presence of the most serious threats from the United States, Japan, China, the grouping of ground defense in the Far East is completely inadequate and requires repeated amplification. At the same time, there are no prospects for such an increase, unfortunately.

What’s particularly interesting is the contradictory perceptions between West and East. American, European and Israeli experts worry about the latest high-performance Russian surface-to-air missiles, such as the S-300, S-400 and S-500 systems, are making the skies too dangerous. They fear that older Cold War-era fourth-generation aircraft like the F-15 will suffer crippling losses, even if fifth-generation stealth aircraft like the F-35 can survive.

But to a Russian observer like Khramchikhin, the reverse is true. It is Russian air defenses that are vulnerable to saturation and destruction as Russian missile batteries are wiped out by Western smart bombs or run out of ammunition because there are not enough spare missiles to be reloaded quickly.

Which side is right? It could be both or neither. If there is one common denominator between militaries, it’s the fear that the other side has more and better weapons. That much America and Russia share in common.