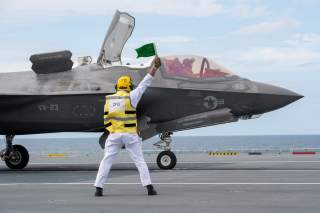 As the S-400 missile system makes waves in the media for ongoing baltic deployments and a high-profile Turkey deal, the Russian defense industry quietly works on its successor.

After a long hiatus, Russian defense sources are reporting that the S-500-- or “Triumfator-M”-- is on the verge of serial production. Industry and Trade Minister Denis Manturov told Russian media in late April that that S-500 development is in its final stages: "I’m talking about the completion of research and development and the subsequent beginning of batch production. I can now say that the R&D work is about to be completed." Meanwhile, the first S-500 officer cadre will be trained this year.

The S-500 has long been hailed by Russian commentators as the next generation of Russian anti-air capabilities, one that not only counters the F-35 but handily outperforms competing American systems. “The S-500 is a blow against American prestige,” Almaz-Antey head engineer Pavel Sozinov told Russian media. “Our system neutralizes American offensive weapons, and surpasses all of America’s much-hyped anti-air and anti-missile systems.”

Even so, key questions remain concerning the S-500’s capabilities and role. What is currently known of Triumfator’s specifications suggests an impressive generational leap. At an alleged engagement distance of 600 kilometers, the S-500 outranges its predecessor by a whopping 200 km.It also boasts tracking and engagement capabilities against not just hypersonic targets (those traveling at a speed of over 5 mach), but even low earth orbit satellites and some types of spacecraft.

But while the technical superiority of the S-500 is hardly in doubt, the same cannot be said of its purpose within Russia’s current military roster and export industry. With S-400 units still being shipped to anti-aircraft regiments across Russia and exported throughout the world, widely replacing the S-400 with its more expensive S-500 counterpart would be a massive financial and logistical commitment. Whereas the introduction of the S-300 and S-400 is separated by about three decades, this would an abnormally short upgrade cycle of just ten years.

Though plans for the S-500 remain unknown, there are some early signs to suggest that the Russian defense industry is attentive to these concerns. The S-400 was introduced as a clear successor model to completely phase out the S-300, but current Russian branding suggests that the S-500 is meant to complement-- rather than replace-- the S-400.  This means that, instead of replacing the S-400 across the board, Russia’s military merely intends to supplement it with S-500’s where strategically appropriate. Such a missile defense doctrine would not be without tactical benefits; deploying S-400 and S-500 units side by side would would make it more difficult to overwhelm them with a missile saturation strike while broadening the perimeters of Russian enforceable airspace.

The newfound briskness with which Russia is pushing out the S-500 may also be grounded in export calculations.  On the heels of a successful S-400 deal, Rosoboronexport (Russia’s official arms export agency) is optimistic that Ankara will be among the first purchasers of the S-500.

Turkish President Recep Tayyip Erdoğan has reciprocated Russian advances in a recent interview: "We concluded the S-400 issue, signed a deal with the Russians, and will start co-production. Later, we may work on S-500s."