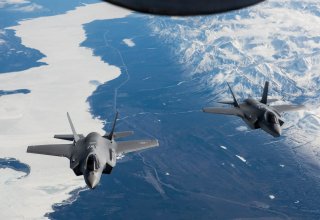 The F-35s’ arrival at Eielson Air Force Base in the Alaskan interior marks the beginning of a major expansion of U.S. air power just east of Russia.

The two single-engine F-35As flew directly from Lockheed Martin’s factory in Fort Worth, Texas to Eielson. An array of Alaska-based Air Force aircraft met the F-35s over the northern state, including a KC-135 tanker, three F-16s and two F-22s.

The Air Force has stood up a fighter squadron to operate the F-35s in Alaska. The re-establishment of the 356th Fighter Squadron at Eielson puts the radar-evading warplanes within reach of Russian air space.

It might not be long before F-35s join Alaska-based F-22s in intercepting Russian bombers and other warplanes that frequently probe American defenses. The F-35s also quickly could deploy in the event of a major war in the Asia-Pacific region.

The Air Force decided to reestablish the 356th and another squadron for F-35 operations as well as to expand the flying branch’s presence in Alaska. Squadrons in the state could be among the first to head west in the event of a major conflict with Russia or China.

The 356th is authorized 24 fighters. After its sister unit stands up, Eielson could house as many as 54 F-35s. The Air Force altogether hopes to acquire around 1,700 F-35s through the 2030s, replacing hundreds of F-16s and A-10s and helping the service to grow its force structure.

By 2022 Eielson and nearby Elmendorf Air Force Base together could host four squadrons of stealth fighters. Elmendorf’s 3rd Wing flies two squadrons with around 40 F-22 Raptors and has been on the cutting edge of tactics-development for the twin-engine jet.

A squadron of F-16s at Eielson acts as an “aggressor” force, playing the enemy in war games. The base is lucky to have the F-16s. Twice since 2013 the Air Force has mulled shutting down the squadron. But preparations for high-end warfare have increased demand for aggressor services.

The Air Force expects private companies to meet most of that demand. Alaska will be one of the few states with a military-run aggressor force. Co-locating aggressors with F-35s at Eielson could help the F-35 pilots to prepare for major warfare against a high-tech enemy.

“We are strategically placed here in Alaska to prepare and project fifth-generation stealth fighter capabilities, working with our program partners and allies in the Pacific and to be ready, if called, to deploy around the world,” said Lt. Col. James Christensen, commander of the 356th Fighter Squadron.

Adding two F-35 squadrons requires a major expansion of Eielson’s facilities. Base population could double to around 4,000 personnel.