The F-35 Stealth Fighter Still Has Hundreds of Flaws 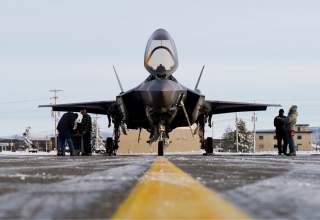 It was an impressive sight when a brand-new F-35A stealth fighter roared down the runway at Lockheed Martin’s factory airfield in Fort Worth, Texas, on March 10, 2020.

Sporting a fresh silvery coating of radar-absorbing material and the unique, black markings of the Alaska-based 354th Fighter Wing, the F-35 flew a test sortie to verify its systems ahead of its planned delivery.

But the $85-million F-35’s striking appearance belied problems underneath the skin. Lockheed has delivered 500 F-35s of three variants to around a dozen operators all over the world. The Israeli, American and British militaries all have deployed their f-35s in combat.

Still, the type has problems. Hundreds of them. And Lockheed and the multinational program office both are trying hard to avoid fixing them, according to a new report from Dan Grazier, an analyst with the Washington, D.C. Project on Government Oversight.

Analyzing a “deficiency report metrics” document from the Joint Strike Fighter Program Office, Grazier concluded that the office “has made little progress in fixing the fighter jet’s hundreds of design flaws, and continues to discover more of them.”

“The program is currently dealing with 883 unresolved design flaws — and has no plan for correcting over 160 of them,” Grazier added.

More than half of the deficiencies officially remain “open, in dispute.” “This means pilots or engineers believed they found a problem, but the contractors tasked with fixing the problems are claiming no problem exists,” Grazier explained.

Program officials are waiting for future modernization efforts to correct 10 design flaws. There are another 273 problems for which engineers have identified solutions, but which are awaiting funding or additional testing.

Most worrying, according to Grazier, are the 162 deficiencies that the program office listed as “open, no planned correction.” These flaws are likely to persist as more and more F-35s enter front-line service, and could weigh on the plane’s readiness and effectiveness in combat.

Lockheed isn’t helping as much as it could. Sources in the F-35 program told Grazier that Lockheed’s default response to any identified shortcoming has been to insist that the company’s design meets specifications. The company declines to make any further changes without a contract modification.

“In other words, the contractors will not fix the design flaws until the government pays for the changes,” according to Grazier.

The deficiences-report that Grazier obtained overlaps with other reporting on lingering problems with the F-35.

Anthony Capaccio at Bloomberg back in January 2020 got an early look at the annual report from Robert Behler, the Pentagon’s director or operational testing and evaluation. Behler’s report focused on 873 bugs in the F-35’s software plus 13 other “must-fix” issues, including problems with the 25-millimeter gun on the U.S. Air Force’s F-35A model.

And trade publication Defense News in early June 2019 revealed lingering issues with the F-35’s flight-control system. At high angles of attack, the F-35B and the carrier-compatible F-35C have a tendency to depart from controlled flight, Defense News reported.

The Pentagon at the time wanted Lockheed to fix the 13 most-critical problems before the company starts work on the JSF’s latest Block 4 software.

Despite its problems, the F-35 is on track to become one of the world’s most numerous warplanes.

The F-35 program over its decades-long lifespan could cost the United States alone more than a trillion dollars for development, acquisition and support.