If We Just Fix These 900 Flaws, America's F-35 Stealth Fighter Will Be Unstoppable 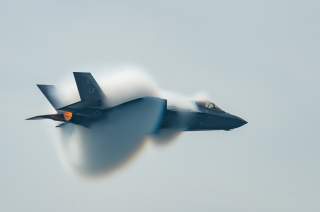 Anthony Capaccio at Bloomberg got an early look at the report from Robert Behler, Director, Operational Test & Evaluation. Behler’s report cites 873 software flaws related to the F-35 plus 13 “must-fix” issues, including problems with the 25-millimeter gun on the U.S. Air Force F-35A model.

None of the problems in the DOT&E report actually are new, according to Capaccio, but they do underscore the difficulty Lockheed Martin and the F-35’s sponsor governments have had in developing the plane.

Trade publication Defense News in early June 2019 revealed lingering flaws in the F-35’s design. At high angles of attack, the F-35B and the carrier-compatible F-35C have a tendency to depart from controlled flight, Defense News reported.

The Pentagon wants Lockheed to fix the 13 most-critical problems before the company starts work on the JSF’s latest Block 4 software.

The 873 software bugs that DOT&E listed in the recent report actually represent an improvement. The test office in late 2018 cited 917 flaws in the F-35’s code.

The F-35, which first flew in production form in 2006, is on track to become one of the world’s most numerous warplanes. Lockheed so far has delivered nearly 500 F-35s in three models: the conventional F-35A, the vertically-landing F-35B and the big-wing F-35C for aircraft-carrier operations.

The F-35 program over its decades-long lifespan could cost the United States alone more than a trillion dollars for development, acquisition and support. Each airframe costs around $100 million.

The F-35 has entered service, and even flown in combat, before Lockheed has completed the plane’s development.

U.S. Marine Corps F-35Bs in September 2018 conducted an air strike in support of what the U.S. Navy described as "ground clearance operations" in Afghanistan. The U.S. Air Force flew its own F-35As in combat for the first time over Iraq in April 2019.

The Navy is still working up its F-35C squadrons for their first front-line cruise aboard an aircraft carrier, currently scheduled for 2021.

The Royal Air Force flew its F-35Bs in combat for the first time in 2019, over Syria. The U.K. F-35B’s sortie rate in wartime conditions was no better than the sortie rate the remnant fleet of 1980s-vintage Tornado fighter-bombers achieved in the years preceding the type’s 2019 retirement.

The eight Tornadoes the RAF deployed to Cyprus for missions over Syria as recently as 2015 managed two, two-ship sorties a day, each lasting six to eight hours, according to Financial Times.

Lingering problems with the F-35 are unlikely to slow the JSF program. The U.S. Congress habitually adds F-35s to the Pentagon’s own annual requests for the type. More and more governments are placing orders for F-35s.

Lockheed spokesperson Brett Ashworth told Capaccio that the F-35 “continues to mature and is the most lethal, survivable and connected fighter in the world.”