The U.S. Air Force Just Received Its First F-35A Jets Based in Europe 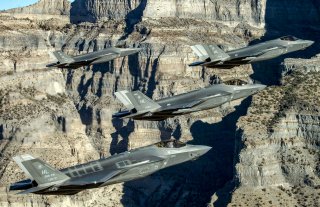 An airbase in the United Kingdom, Royal Air Force Lakenheath, just received a delivery of the F-35A Lightning II. Though based overseas, the fighter jets will be in U.S. Air Force service and flown by American pilots. They’re the first F-35 jets to be permanently stationed in Europe.

Gen. Jeff Harrigian, the commander of U.S. Air Forces in Europe–Air Forces Africa, said in a press statement that “coalition forces train and fight in the most dynamic theater, requiring the most advanced platforms. The Valkyries are leading our F-35 integration across Europe. We’ve come a long way, and now we’re extending our reach as a coalition force and what we will accomplish together.”

Furthermore, the F-35As “will belong to the 495th Fighter Squadron, which was nicknamed the “Valkyries” during a voting contest in 2020. The new F-35 squadron will consist of 24 aircraft, delivered in a phased approach.”

Valkyries’ epitomizes the force’s move toward more inclusivity and equally represents the fifth-generation stealth fighter’s air superiority,” explained Lt. Col. Ian McLaughlin, 495th Fighter Squadron commander in the Air Force statement. “Like the Valkyries themselves, we’ll be vital to determining the fate of our adversaries in the battlespace.”

F-35 jets are slowly making their way around the continent. In addition to the United Kingdom’s Royal Air Force, F-35 variants are also in service with Norway, Poland, the Netherlands, Italy, Denmark, Belgium, Finland. Switzerland may soon adopt the F-35 into service as well, despite pushback from local pacifist groups.

A slew of other countries outside of Europe also fly F-35 variants, including Australia and Japan. Canada, Singapore, and South Korea have also mulled F-35 acquisitions as well.

Though the F-35 platform is arguably the most successfully 5th generation stealth fighter to date, the fighter is no panacea. One of the drawbacks critics have cited is the fighter’s combat radius as an issue. To remedy the problem, the Pentagon is exploring an upgraded engine option for the F-35 jet and both Pratt & Whitney and General Electric are developing upgraded engines for the fighter.