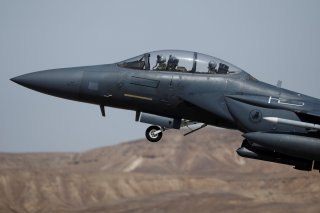 The use of practical virtual reality (VR) has become an actual reality in recent years, and the U.S. Air Force will soon use the technology to leverage enhanced warfighter training. This month the Air Force announced the inauguration of the new Virtual Test and Training Center (VTTC) at Nellis Air Force Base (AFB), Nevada—which will house the future of joint-aerial combat training.

The VTTC will utilize the facility so that pilots can simultaneously train together in both live and virtual environments. In fact, the experience provided at Nellis AFB will provide a more realistic and effective training while also mitigating the constraints of a physical range.

However, this is vastly more than a complex video game system.

This month the Air Force opened the doors of VTTC, which begin actual training next spring or summer. The $38 million center will allow Air Force pilots to practice advanced tactics that can replicate combat against near-peer nations and other adversaries.

“When you think about great power competition and where we might have to fight—shipping out to fight a China or Russia, particularly—there is no live training venue for the joint force, certainly for the Air Force, that’s big enough, that has the threat density that can replicate what China or Russia can do,” Major General Chuck Corcoran, who heads up the U.S. Air Force’s Air Warfare Center at Nellis told Defense News.

Corcoran added that while live exercises will remain an important component of pilot training, this new facility will be able to allow pilots to engage in a battlespace that is populated by high-end threats. Air Force pilots will be able to network with other pilots and the system will let them take part in situations that are impossible to emulate even in live training “Red Flag” exercises.

The VTTC will also reportedly support a range of aircraft including F-16s, F-22s, F-35s and F-15Es with more aircraft likely to be added. While as noted it isn’t a video game, it is still software-based so the various “add-ons” or “downloadable content” (DLC) of other aircraft—friend and foe alike—should be easy enough to integrate with the system.

The first missions are scheduled for next year, but they could expand considerably to include platform-specific counterterrorism and live-fire exercises. These missions could incorporate multi-domain and near-peer threats across air, space and cyber domains. Moreover, the ability to connect live and virtual training environments will reduce the need for numerous aircraft and crew to travel to a singular location. In doing so, this could even reduce fiscal burden for the force.

“In the next year or so we will officially have it up and running,” added Colonel Dean Caldwell, the USAFWC VTTC director. “The VTTC will then be turned into a squadron and be placed under the Nevada Test and Training Range.”

Simulators have long been used to train pilots and this goes back nearly a century. The original Link Trainer, the first flight simulator that was used to teach pilots how to fly by instruments was developed in 1929 by Edwin Albert Link of Binghamton, NY.

However, the technology has advanced considerably and has been instrumental in F-35 training, while the military has been upping its game with VR along with Augmented Reality (AR) in recent years for infantry and other training in ways not possible just a few years ago.

The VTTC at Nellis AFB is just one new VR-based program being adopted by the Air Force. In July the Virtual Reality Procedures Trainer (VRPT) was introduced and could potentially transform the way B-52 Stratofortress student-pilots train for combat. The main advantages of the VRPT are in its potential to reduce human bias in instruction, provide better access to training for student pilots, and give students immediate feedback that lessens the chance they develop poor habits in the early phases of training.

It is a notable example of how twenty-first-century VR is used to train pilots on an early Cold War-era bomber like the B-52.