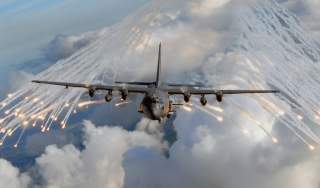 Attacking enemy fighters in close-air-support aircraft, using ground-based laser designators to “paint” targets for aircraft and training friendly forces for the rigors of high-casualty close-in combat -- are all US Air Force Special Operations Force skills tested and refined during the last decade and a half of wars in Iraq and Afghanistan.

Drawing upon these Tactics, Techniques and Procedures (TTPs), Air Force Special Operations Command is accelerating a strategic shift from its recent counterinsurgency focus to preparing for “high-end” combat - or major force-on-force warfare against a technologically advanced enemy.

“I would tell you there is definitely strategic value for Special Operations in the high-end fight. With our mentality, we think outside of the box and about how to present dilemmas for the enemy,” Lt. Gen Marshall Webb, Commander - Air Force Special Operations Command, said Sept. 17 at the Air Force Association Convention.

Webb emphasized that the Command’s counterterrorism focus will not diminish in coming years but likely increase as existing threats persist and new ones emerge. At the same time, he made it clear that AFSOC is “laser focused on the high-end” and currently adapting its well-established TTPs to support major power warfare.

“We have to extend the TTPs for high-end conflict as well, including multi-domain command and control,” Webb said.

Interestingly, migrating combat-tested TTPs to a high-end fight does not seem to be an insurmountable stretch but, rather, an extension of refined combat practices. Significantly, many TTPs fundamental to counterinsurgency are also of great tactical and strategic relevance to major-power warfare. For example, during Operation Enduring Freedom in Afghanistan, Air Force Special Operations, the Special Tactics Squadron, used advanced targeting techniques to guide aircraft attacking the Taliban. This included using Forward Air Controllers to radio strike coordinates to circling attack aircraft and using laser designators to paint ground targets.

AFSOC contributions to the war in Afghanistan are highlighted in a 2017 Special Operations Annex portion of Air Force Doctrine published by the Lemay Center for Doctrine, Maxwell AFB.

“AFSOC CCTs were instrumental in the first major gain of the conflict, leveraging airpower that led to the capture of the northern city of Mazar-e-Sharif on 9 November 2001—a major breakthrough in the struggle to oust the Taliban and al-Qaeda,” the doctrine writes.

This kind of integrated air-ground operation, used to great effect in Afghanistan, is also something of potentially great value in a high-end conflict as well. The prospect of needing close air support to fortify advancing units on the ground or attacking low-flying enemy air assets presents the kinds of scenarios anticipated in major war.

The Air Force Special Operations AC-130 gunship, for instance, often circled Kandahar in Afghanistan, to fire its 20mm side-firing cannons to attack Taliban fighters. While there are of course major differences when between attacking insurgents and engaging in major air combat with a near-peer enemy, some of the tactics, approaches and technologies do seem to cross over and offer value to both kinds of conflict.

Webb further elaborated upon AFSOCs role in close air support missions will be enhanced by the service’s emerging Light Attack Aircraft. The aircraft is designed for rugged counterinsurgency missions in combat environments where the Air Force has established air superiority. At the same time, the need for these kinds of attack missions are at very least conceivable, if not likely, in large-scale warfare also.

“The need for the Light Attack Aircraft is an excellent requirement for AFSOC,” Webb said.

Special Operations Forces (SOF) are also known for a substantial intelligence expertise, used to both train and equip friendly forces and offer crucial combat-relevant detail to the larger force. Advising allied fighters is yet another instance of skills likely to be of great value in major war. Part of this intel mission includes air and ground reconnaissance using sensors, scouting forces and unique positioning in combat terrain in support of the larger fight.

SOF is “out there in the hinterlands and don’t have the luxury of an F-16,” Webb explained.

The Air Force’s Curtis Lemay Center for Doctrine, Development and Education also cites the full range of Special Operations mission sets, many of which are specifically designed for large scale war. Combat areas listed in the Doctrine text include a range of missions relevant to both COIN and major war such as “information operations, precision strike, ISR, command and control and specialized air mobility.”

The overall strategic roadmap, such as that articulated by Webb, mirrors multi-domain concepts written into special ops doctrine materials. The Lemay Center’s 2017 Doctrine Special Ops Annex text identifies a “combat continuum” for Special Ops missions, to include low-intensity conflict such as security cooperation and deterrence, limited contingencies and major operations.”