U.S. and Romanian Troops Are Training Together – And Russia is Watching 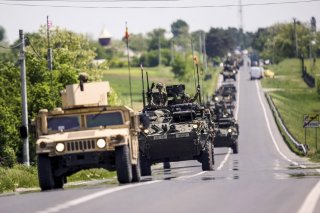 In the early months of 2021, Russian troops steadily built up along the country’s western border with Ukraine. This has caused considerable tension in Ukraine, where Russian and Ukrainian troops are fighting a shadow war in the country’s Donbass region. However, Russian escalation has also caused consternation in Romania, which sits across the Black Sea from illegally occupied Crimea, where Russian tanks, rocket batteries, and aircraft have been stationed.

In late April and early May, some of these troops were withdrawn to the east, seemingly to de-escalate tensions in the run-up to the summit between U.S. President Joe Biden and Russian President Vladimir Putin in mid-June. However, Russian attack helicopters have remained in Crimea, as have several divisions of ground troops, leading to concerns in the West that an escalation of the conflict in Ukraine might be underway.

Therefore, in May, American and Romanian forces launched the “Trojan Footprint” joint exercise, in which troops from ten NATO nations took part. U.S. and Romanian helicopter pilots also engaged in joint exercises, deploying roughly 300 ground troops stationed at the Mihail Kogalniceanu Air Base to a nearby training area.

American and NATO troops are currently present in Romania as part of the European Deterrence Initiative (EDI), a program which has emphasized cooperation between NATO allies and strengthened its security infrastructure in Eastern Europe. The program was initiated in 2014, shortly after Russia’s seizure of Crimea and the beginning of the war in Ukraine.

For the past seven years, tensions between NATO and Russia have steadily soured. The conflict in Ukraine, which borders four of its members and has aspired to join the military alliance, has concerned NATO, and Russia has increasingly come under sanctions in America and Western Europe.

Romania, formerly a Communist dictatorship under the erratic strongman Nicolae Ceausescu, held its first free elections in 1990 and joined NATO in 2004. The nation, along with its southern neighbor Bulgaria, spends 3 percent of its GDP on defense, more than the alliance’s required 2 percent (a requirement which many NATO nations have ignored in the past). Romania is also home to the region’s only AEGIS missile-defense system, and it has bought a host of military hardware from the United States, notably including Patriot missiles.

As Romania is on NATO’s eastern frontier and would be near the front line of a hypothetical future conflict in Eastern Europe, training exercises are frequently held there.