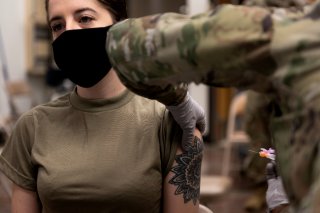 The Department of the Army announced on Wednesday that soldiers who refuse to be vaccinated against COVID-19 will be immediately separated from the service. The directive, issued by Secretary of the Army Christine Wormuth, said that commanders are to initiate involuntary administrative separation proceedings against any soldier who has refused the vaccination order and does not have an approved or pending exemption request.

"Army readiness depends on Soldiers who are prepared to train, deploy, fight and win our nation's wars," Secretary Wormuth said. "Unvaccinated Soldiers present risk to the force and jeopardize readiness. We will begin involuntary separation proceedings for Soldiers who refuse the vaccine order and are not pending a final decision on an exemption."

The discharge order comes after the Pentagon made the vaccine mandatory for all service members in August 2021.

However, the vast majority of all active duty troops have received at least one dose. Currently, 96 percent of active troops have been completely vaccinated, while only 3,350 soldiers have refused to get the vaccine. An additional 5,900 have received temporary exemptions.

To date, roughly seventy-nine uniformed military personnel across the different services have died from Covid-19.

Army Directive 2022-02 explains exactly how Army commanders are to proceed with separation proceedings. Commanders are required to process separation actions as expeditiously as possible. In addition, service members separated due to refusal of the vaccination order will not be eligible for involuntary separation pay and may be subject to recoupment of any unearned special or incentive pays.

Those separated from the Army will not be punished. The Army stated that unless additional misconduct warrants otherwise, the least favorable characterization of service that may be issued is General (Under Honorable Conditions).

Unvaccinated service members who have requested medical exemption or religious accommodations are temporarily exempt from the vaccination requirement while their requests are under review. Soldiers who receive denials of their medical exemption or religious accommodation requests will then have up to seven calendar days from the denial to get vaccinated. Commanders may use their discretion to adjust the timeline based on local vaccination supplies, submit an appeal to the final appeal authority, or ensure that all unvaccinated service members comply with COVID-19 screening and testing requirements.

As of last month, the Army reported that out of the 709 permanent medical exemption requests submitted to the Army, only six had been approved. Additionally, 2,910 claims of permanent religious exemptions have been submitted, with 266 being rejected and none being approved.

Army leaders will also continue to counsel all unvaccinated individuals on the health benefits of receiving the COVID-19 vaccine.

As of this week, the U.S. Army has not yet involuntarily separated any soldiers solely for refusing the lawful order to receive the COVID-19 vaccine. However, as of January 26, Army commanders have relieved a total of six regular Army leaders, including two battalion commanders, and issued 3,073 general officer written reprimands to soldiers for refusing the vaccination order.