The U.S. Army Conducted Not One But Two Missile Defense Tests in a Week 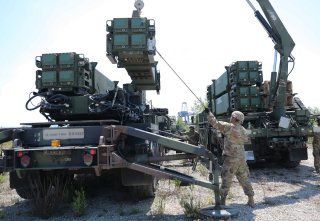 In the deserts of White Sands Missile Range, New Mexico on August 20 the U.S. Army Future Command conducted a major test of its missile defense technology that was able to successfully destroy two threat targets simultaneously. This was actually the final exercise for Northrop Grumman Integrated Battle Command System (IBCS), and it followed another test that was conducted a week earlier.

"These two back-to-back successful test events are a testament to the commitment and partnership between the great men and women of the army’s operational and acquisition communities and Northrop Grumman's program team," said Kenn Todorov, vice president and general manager for Northrop Grumman combat systems and mission readiness. "We are committed to the mission of the U.S. Army and look forward to continuing that partnership in getting the game-changing IBCS capability into production and fielded."

Defense One reported that the cruise missile and advanced tactical ballistic missile targets were launched from different places toward the Army air and missile defenders while multiple and disparate radars sent data to the Integrated Air and Missile Defense Battle Command System (IAMDBCS), which tracked the incoming targets.

Completion of the tests cleared the way for the Army to decide whether the system is ready for production, but is even more impressive as it was the second successful test in just a week. The IBCS was successfully used to coordinate the defeat of two incoming cruise missile threats amid debris while a portion of the system was even brought down through jamming efforts.

"I would like to recognize how exceptionally proud I am of the soldiers of the 3-43 ADA Battalion," said Maj. Gen. Rob Rasch, Army Program Executive Officer, Missiles and Space, as reported by Defense-Blog.

"This formation's laser focus and steadfast dedication, starting with New Equipment Training last year through this Limited User Test live fire, will ultimately transform the Air and Missile Defense fight for our joint formations," added Gen. Rasch. "It's been amazing to watch our soldiers' ability to successfully track, engage, and destroy multiple targets in a highly-complex live fire operational test, further demonstrating the IAMD's game-changing technological advantage. As we continue to fine-tune system performance in order to fully demonstrate system requirements in the Initial Operational Test & Evaluation in Fiscal Year 2022, we maintain high confidence for success due to the great leaders and soldiers of the 3-43, who will ultimately become the first-ever IBCS-enabled battalion."

IBCS was developed as the centerpiece of the U.S. Army's modernization strategy for air and missile defense to address the changing battlefield.