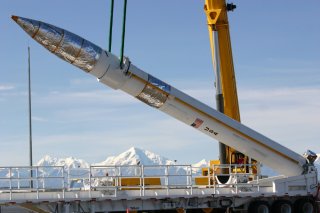 Hypersonic weapons are now being fired from U.S. Air Force planes and U.S. Army ground launchers while also being fast-tracked to fire from U.S. Navy destroyers by 2025 and submarines by 2028. These technological breakthroughs are already reshaping warfare tactics and concepts of operation.

Projectiles that skip along the upper boundary of the earth’s atmosphere and descend upon targets at more than five times the speed of sound are no longer a “concept” for the future. The U.S. military is already in the process of arming major platforms with them. The U.S. Air Force, for example, has already fired its Air-Launched Rapid Response hypersonic weapon from a B-52 Stratofortress.

What about hypersonic weapons ten or twenty years from now? What will they consist of? How fast will they fire? Will they maneuver in flight, perhaps traveling at now unimagined speeds?

These questions are now being explored through cutting-edge basic research efforts at the Army Research Laboratory, where teams of engineers and scientists are experimenting with mixtures of ceramic, metal, polymer, and composite materials at the microscopic level to uncover better performing materials to engineer the weapons of the future. While the work could yield near-term applications in the event of breakthrough testing, much of the exploration is aimed at uncovering “disruptive” or paradigm-changing scientific breakthroughs.

Specific materials built into weapons systems bring distinct properties such as being lighter in weight, more resistant to penetration or better equipped to maneuver and manage accurate flight at previously unimaginable temperatures.

Nicholas Ku, a materials engineer working for the Ceramic and Transparent Materials Branch at DEVCOM Army Research Laboratory spends his time mixing, testing, heating, and experimenting with different combinations of materials in search of breakthrough discoverings.

“Ceramics are of interest for hypersonics applications, through the way additive manufacturing has an ability to create complex shapes, decrease manufacturing costs as well as increase the design space in making new components,” Ku said.

Ku was clear that much of the work involves simply creating different combinations and layers of materials. The process is called “additive manufacturing,” and Ku and other ARL scientists use it to uncover new materials for armored vehicles, body armor, and projectiles such as hypersonics. Ku explained that traditional methods of manufacturing greatly limit the complexity of the design when compared with options made available through additive manufacturing, a circumstance that introduces new dimensions of possibility.

“By enabling additive manufacturing of these materials, we can increase the design space,” Ku said.

The shape and composition of a hypersonic projectile determine key aerodynamic and performance variables of great consequence. Will yet-to-be-discovered materials will enable new hypersonic structures to travel as much as two or three times as fast as existing hypersonic projectiles? Perhaps new materials can enable a hypersonic weapon to achieve previously unprecedented precision flight path and targeting.

“Using a simple test, we can get an idea of some material properties such as hardness, strength, and fracture toughness. These are used as markers to kind of down select materials and designs to move forward,” Ku said.

This kind of research has likely already generated massive breakthroughs, given the U.S. Army’s progress with hypersonic weapons. The service plans to have its Long Range Hypersonic Weapon operational by 2023, and U.S. Army engineers are already working on a “tech insertion” package to enable hypersonic projectiles to maneuver in flight and hit moving objects.