The U.S. Navy Is Working on a Missile to Kill Hypersonic Weapons 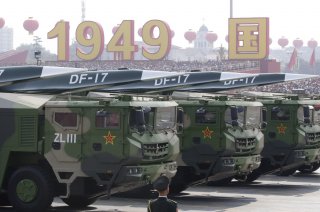 Hypersonic missiles are widely seen as a weapon of the future. The United States is developing its own, with the Air Force’s ARRW hypersonic missile failing its first test earlier this month. A recent report stated that the U.S. military is working on seventy different hypersonic weapon efforts, for which it has requested $15 billion in funding.

ARRW stands for Air-Launched Rapid Response Weapon, and it has been described as “a boost-glide type hypersonic missile that is supposed to reach Mach 20 speeds before it glides to its target.” However, the ARRW’s first test launch failed earlier this month.

Other countries, including those hostile to the United States, are known to be developing their own versions of the weapons. Russia is working on hypersonic missile defense, and China has its own hypersonic weapons capability. North Korea, according to a report earlier this month, has established a hypersonic missile college. India has also joined the hypersonic race.

Meanwhile, a new report says that the United States is preparing a weapon that is meant to combat hypersonic missiles.

According to The War Zone, the Navy and the Missile Defense Agency are working on an SM-6 missile that can be used against an “advanced maneuvering threat,” which is understood to mean hypersonic missiles. The new missile, per the Pentagon, will be tested later this year.

Barbara McQuiston, the acting undersecretary of defense for research and engineering, mentioned the test in testimony before the Senate Appropriations Committee’s Subcommittee on Defense this week, the report said.

“MDA [the Missile Defense Agency], in cooperation with the U.S. Navy, demonstrated early capability against maneuvering threats during flight-testing of the Standard Missile (SM)-6 Sea-Based Terminal (SBT) defense, and it will further demonstrate this capability against an advanced maneuvering threat-representative target later this year,” McQuiston's written testimony said, as reported by The War Zone.

“We will continue to advance our SBT capability to address the regional hypersonic threat and will test that capability in the FY 2024 timeframe.”

The Pentagon revealed last year that such weapons were at least under consideration.

It’s been said that the SM-6 missile “can hit almost any target.” The Navy confirmed its designation as the latest cruise missile in early 2019.

“But it’s the less-well-known SM-6, which also is a Raytheon product, that could dominate the Navy’s planning,” an analysis last month said. “Of the 10 major missiles that arm the Navy’s 285-and-growing surface ships and submarines, only the SM-6 is capable of striking targets at sea, in the air and at the edge of the atmosphere.”