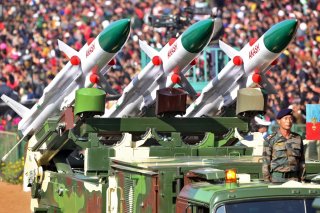 Here's What You Need to Remember: The Pentagon has seen the threat and has worked to develop space sensor layer technology as a countermeasure. Last year, the U.S. Missile Defense Agency entered Phase IIa of an emerging sensor technology specifically engineered to establish a continuous ‘track’ on approaching hypersonic missiles.

India is among the elite nations of the world to possess nuclear weapons, and according to multiple sources could also be in another elite club of nations to possess hypersonic missile technology. After years of research and development (R&D) efforts this month, India successfully tested an indigenously developed hypersonic technology demonstrator vehicle (HSTDV).

To date, only the United States, Russia and China boasted the technology. Monday’s test comes as tensions between New Delhi and Beijing remain high over the disputed Line of Actual Control, which separates Indian and Chinese-controlled territory along the Himalayas.

A statement from the Defence Research and Development Organisation (DRDO) noted the mission demonstrated the capabilities for the platform.

“The @DRDO_India has today successfully flight tested the Hypersonic Technology Demonstrator Vehicle using the indigenously developed scramjet propulsion system,” Indian Defence Minister Rajnath Singh posted on the social media platform Twitter. “With this success, all critical technologies are now established to progress to the next phase.”

DRDO also said that the hypersonic cruise vehicle was launched by utilizing a previously tested solid rocket motor, which propelled the vehicle/missile to an altitude of thirty kilometers, where the aerodynamic heat shields separated at hypersonic speeds.

“The cruise vehicle separated from the launch vehicle and the air intake (channel) opened as planned,” the DRDO statement read. “The hypersonic combustion (was) sustained and the cruise vehicle continued on its desired flight path at a velocity of six times the speed of sound i.e. nearly 2 km/s for more than 20s. The critical events like fuel injection and auto ignition of scramjet demonstrated technological maturity. The scramjet engine performed in a text book manner. The parameters of launch and cruise vehicle, including scramjet engine was monitored by multiple tracking radars, electro-optical systems and telemetry stations.”

A warship was deployed to the Bay of Bengal to monitor the performance during the cruise phase of the test.

“Congratulations to DRDO for the successful flight of the Hypersonic Test Demonstration Vehicle today,” Prime Minister Narendra Modi responded in a tweet and statement. “The scramjet engine developed by our scientists helped the flight achieve a speed 6 times the speed of sound! Very few countries have such capability today.”

HSDTV has a range of uses that include missiles for air defense as well as for surveillance and reconnaissance. In addition, the technology can be employed as energy-efficient, low-cost and reusable satellite launch vehicles.

As a weapon, hypersonic missiles are notable in that they can travel at five times the speed of sound and can maneuver with computerized precision while descending back into the earth’s atmosphere, which makes them nearly unstoppable. The speed and force is so significant that a hypersonic missile can inflict damage by sheer “kinetic” impact without needing explosives.

But they can also be armed with nuclear warheads. The combination of an intercontinental ballistic missile with a nuclear warhead presents a very serious concern to militaries around the world.

The Pentagon has seen the threat and has worked to develop space sensor layer technology as a countermeasure. Last year, the U.S. Missile Defense Agency entered Phase IIa of an emerging sensor technology specifically engineered to establish a continuous ‘track’ on approaching hypersonic missiles. Called the Hypersonic Ballistic Missile Tracking Space Sensor (HBTSS), the technology could be as much of a game-changer as the hypersonic missiles.