A Crisis Is Brewing Between India and China. But This Time There Is a Big Difference. 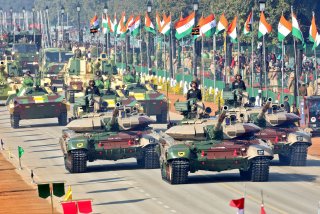 It isn’t entirely clear what is taking place along the Line of Actual Control (LAC) that separates Chinese and Indian-controlled territory along the Himalayas. However, the more credible voices in the Indian commentariat contend that in May, China made a series of ingresses along the undemarcated, disputed “line” and have assumed control of roughly 60-square kilometers in the Ladakh region claimed by New Delhi, including a strategically-important region near a nearly-completed highway that serves as a vital line of communication to its frontiers with China and Pakistan. And there are unconfirmed reports this morning of renewed clashes near the LAC that have left three Indian soldiers dead and maybe even dozens captured.

Assuming that these contentions are true and that this is no spontaneous border standoff between China and India, one must ask what Beijing’s motivations are. The initial reaction, particularly from China-watchers in the United States, has been to tie Beijing’s moves along the LAC to a broader set of assertive measures, including recent measures to further erode Hong Kong’s autonomy. Beijing, they argue, is exploiting a leadership vacuum in Asia as the United States reels from the coronavirus pandemic, signaling to its neighbors that it is emerging as the region’s dominant power.

But it may be a mistake to reflexively link Beijing’s moves along the LAC to a broader policy of Chinese aggression. In fact, there are indications that China is responding in part to U.S.-backed Indian unilateral measures made last year.

Last August, the Indian government revoked the nominal autonomy of the broader Jammu and Kashmir region, annexing the disputed region which had the status of a state according to the Indian constitution. New Delhi then divided the former “state” into two separate territories: “Jammu and Kashmir” and “Ladakh,” the latter being both the location of recent Chinese ingresses and home to territory claimed by Beijing. Earlier this month, Chinese scholar Wang Shida, writing on the state-run China Economic Net website, seemed to tie India’s annexation of Kashmir to the recent LAC activity, arguing that New Delhi “forced China into the Kashmir dispute” and “dramatically increased the difficulty in resolving the border issue between China and India.” As Wang notes, Beijing’s official response to New Delhi’s Kashmir moves was indeed quite strong—though many observers seemed to interpret them as merely symbolic measures to placate ally Islamabad.

Indeed, it appears that both New Delhi and Washington have severely miscalculated how Beijing would respond to the annexation of Kashmir last year. While many U.S. analysts viewed New Delhi’s moves as an attempt to formalize the status quo, they ignored statements by Indian officials, including Interior Minister Amit Shah, suggesting that India would extend its writ to portions of Kashmir under the control of China and Pakistan. Additionally, the United States, and the State Department, in particular, offered its tacit endorsement of India’s annexation of Kashmir, suggesting that the move could promote economic prosperity in the area and deflecting congressional scrutiny over the draconian lockdown imposed by India over the region. And while President Donald Trump offered on several occasions to mediate between India and Pakistan on Kashmir, the bureaucracy, including the then-top U.S. diplomat for South Asia, Alice Wells, consistently sought to water down that offer.

The United States has provided cover for India as it has sought to create facts on the ground in Kashmir. And so it is unsurprising that China is now trying to create its own facts on the ground. Indeed, by endorsing New Delhi’s unilateralism and attempting to prop it up as a regional hegemon, Washington may be inadvertently facilitating Beijing’s rise as a power in South Asia.

Pakistan is not the sole regional state that fears Indian aggression. In 2015, India imposed a blockade on Nepal, just months after the country was hit by a devastating earthquake. Since then, Nepal, long dominated by India, has been veering into China’s orbit.

In 2017, Nepal joined the Belt and Road Initiative and is reducing its economic dependence on India. A growing partnership with China has given Nepal greater resolve in standing up to India. This month, the lower house of Nepal’s parliament approved a new official map that includes areas claimed by India, after New Delhi inaugurated a road that passes through territory claimed by Kathmandu.

Washington, however, continues to amplify New Delhi’s influence in the region, despite the obvious anxiety it causes for smaller states in the region. It sees India as the locus of regional economic integration. A U.S. grant-funded electric power line project in Nepal became controversial because political forces there perceive to be tied to an American strategy to prop up India and contain China.

Similarly, Sri Lanka has a complicated history with India. While Chinese lending has triggered accusations of “debt-trap diplomacy,” political factions in Sri Lanka still court Beijing as an alternative to New Delhi, which has interfered in Sri Lankan politics. India, for example, trained and armed the Sri Lankan Tamil Tigers terrorist group.

South Asian states, including Pakistan, may come to regret their economic embrace of China as their trade deficits and loan balances grow. But the United States is also making a strategic error by enabling India’s worst instincts. U.S. policymakers see India as a benign power in South Asia and view its extraterritorial actions and unilateralism in recent decades as exceptions to a policy of restraint. But that view is not shared by many of India’s neighbors who have a historical memory of Indian aggression. As a result, they are turning to China to balance India.

With decent relations with both India and Pakistan, the United States is positioned to offer meaningful assistance to both countries toward a negotiated settlement to the Kashmir dispute. But not only did the unelected bureaucracy work to obstruct Trump’s mediation offer, but it also pushed U.S. policy into a new direction by effectively endorsing Indian revisionism. As a result, America not only lost a potentially historic opportunity to bring peace to the region and grow its soft power, but it also inserted itself deeper into the China-India-Pakistan triangle, altering the shape of the regional order, pushing it toward a bipolar one with Beijing and Islamabad on one side and New Delhi and, to some extent, itself on the other.

Indian officials often speak of a two-front war with China and Pakistan. And though such a scenario is presently unlikely, India’s Hindu nationalist government, emboldened by the United States, risks veering into one in the years ahead should it fail to revisit its current regional policy. New Delhi would not be able to walk the walk, given the conventional power disparity between it and Beijing and the growing synergies between China and Pakistan. India and the United States do not view one another as allies. And so it would be a mistake for New Delhi to count on Washington’s support. China’s ingresses along the LAC provide an opportunity for both India and the United States to assess the second-order effects of their policies in South Asia. That reassessment must begin with Kashmir.