Why Donald Trump’s ‘Strategic Approach’ to China Is Wrong 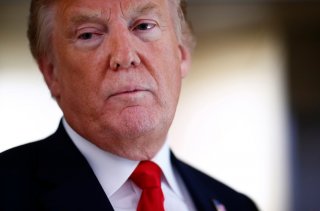 The White House’s new “Strategic Approach to the People’s Republic of China” asserts that it is “guided by a return to principled realism,” but it is heavier on principles that it is on realism. Much of its analysis of China’s strategic intentions and behavior is accurate and persuasive. But in other respects, the document perpetuates the Trump administration’s incorrect diagnosis of the nature and scope of the challenge China poses to the United States. Based on this misdiagnosis, it issues some prescriptions that will probably be ineffective or even counterproductive.

The strategy document starts with the same false premise that was contained within the administration’s December 2017 National Security Strategy: that engagement with China over the past thirty years was based on assumptions that turned out to be wrong and goals that turned out to be unattainable. Specifically, it was based on “a hope that deepening engagement would spur fundamental economic and political opening in the PRC and lead to its emergence as a constructive and responsible global stakeholder.” This approach “underestimated the will of the Chinese Communist Party (CCP) to constrain the scope of economic and political reform in China.” Actually, there was never any reason to doubt the will of the CCP to forestall any economic or political reform that it perceived as threatening the regime. This was made abundantly clear by the Tiananmen Square crackdown in 1989, which predated the post—Cold War years of the U.S.-China engagement process.

More importantly, the document reflects the administration’s inconsistency and equivocation over the past year on the subject of engagement with China. It states that “United States policies are not premised on an attempt to change the PRC’s domestic governance model.” Does this mean that Washington has abandoned the “hope” of economic and political opening in China? Certainly, the administration has declined to acknowledge that engagement has in fact yielded much over the past thirty years in terms of both China’s internal openness and its constructive external behavior. The fact that much more remains to be desired in both respects does not mean that engagement has failed or that hope is lost. Engagement has not failed; it just hasn’t fully succeeded yet, and will obviously take more time.

The White House strategy ultimately acknowledges this when it observes that the “tenets of our approach imply” that “competition necessarily includes engagement with the PRC”—albeit “engagements [that] are selective and results-oriented, with each advancing our national interests.” This is as it should be. “Through our continuous and frank engagement, the United States welcomes cooperation by China to expand and work toward shared objectives in ways that benefit the peace, stability, and prosperity of the world.”

Nonetheless, the introductory section of the strategy document establishes a tenuous framework for such engagement. It claims to provide a “clear-eyed assessment of the CCP’s intentions and actions,” but clear eyes can still be myopic. For example, it is true that “Beijing openly acknowledges that it seeks to transform the international order to align with CCP interests and ideology.” But this is what all big powers do, including the United States: leverage the international order to align with their interests and ideology. China is criticized for its “expanding use of economic, political, and military power to compel acquiescence [emphasis added] from nation-states,” but two paragraphs later we learn that one of the two core objectives of the U.S. strategy is to “compel Beijing to cease or reduce actions harmful to the United States’ vital national interests.” The document also asserts that “we welcome cooperation where our interests align,” but nowhere does it acknowledge areas where American and Chinese interests actually might align. Finally, although it also states that “We do not seek to contain China’s development,” this evades the broader Chinese suspicion that the United States seeks primarily to contain China’s external power and influence.

The other core objective of “our competitive approach to the PRC”—in addition to compelling Beijing’s acquiescence—is “to improve the resiliency of our institutions, alliances, and partnerships to prevail against the challenges the PRC presents.” This is a worthy and necessary objective. Unfortunately, many of the Trump administration’s domestic and foreign policies have been antithetical to its achievement. American institutions have been weakened by the polarization of U.S. domestic politics over the past three years, and U.S. alliances and partnerships abroad have been undermined by the administration’s retreat from multilateralism and its questioning of the U.S. alliance network in particular. Both of these trend lines will need to be reversed before Washington can muster a truly “competitive approach to the PRC.”

The strategy document comprehensively outlines many of the economic, political, and security challenges that the United States faces from China. For example, Beijing’s “extensive use of state-driven protectionist policies and practices harm United States companies and workers, distort global markets, violate international norms, and pollute the environment.” In addition, China’s Belt and Road Initiative (of investment and infrastructure projects across Eurasia) is “part of an effort to strengthen its own companies’ position in the global marketplace at the expense of non-Chinese firms.” It is also true that the BRI is partly “designed to reshape international norms, standards, and networks to advance Beijing’s global interests and vision, while also serving China’s domestic economic requirements.” But this, too, is what big powers do, and the U.S. response should focus on competing rather than complaining.

In the realm of values and ideology, “the CCP has accelerated its efforts to portray its governance system as functioning better than” Western democratic capitalist countries, and Beijing clearly “sees itself as engaged in an ideological competition with the West.” China is promoting its “vision for global governance under the banner of ‘building a community of common destiny for mankind.’” This ideological competition is real, but China’s goals are misinterpreted and overstated here. The strategy document states that “Beijing’s efforts to compel ideological conformity at home . . . present an unsettling picture of what a CCP-led ‘community’ looks like in practice.” But Beijing does not seriously aspire to govern the world the way that it governs internally. It is true that China has “attempted to extend CCP influence over discourse and behavior around the world,” using “the world’s most heavily resourced set of propaganda tools.” But these Chinese efforts have generated much more negative attention and pushback than they have success. Moreover, Beijing’s aspirations for the reform of global governance are about legitimizing China’s model, not imposing it on other countries—let alone the entire world.

The summary of the security challenges from China is surprisingly brief and selective—only half the length of the economic and “values” sections—given the Trump administration’s frequent warnings about the Chinese military, space, and cyber threats. “As China has grown in strength, so has the willingness and capacity of the CCP to employ intimidation and coercion in its attempts to eliminate perceived threats to its interests and advance its strategic objectives globally.” In addition, “Beijing’s military buildup threatens the United States and allied national security interests and poses complex challenges for global commerce and supply chains.” These are eminently valid concerns, but it is important to emphasize that not every Chinese military capability constitutes a threat—unless we are willing to agree that U.S. military capabilities are a “threat” to China.

The strategy document announces that the United States “is responding to the CCP’s direct challenge by acknowledging that we are in a strategic competition” and “accept[ing] the relationship with the PRC as the CCP has always framed it internally: one of great power competition.” The existence of this strategic competition, however, is not exclusively attributable to the CCP, which has not always internally framed the US-China relationship as such. The shifting balance of power since the end of the Cold War—and, more recently, since the global financial crisis of 2007–2008—would inevitably have fueled U.S.-China strategic competition regardless of any mindset or intention on either side.

Along similar lines, the document asserts that U.S. policies toward China “do not make concessions to the CCP’s narrative of exceptionalism and victimhood.” Setting aside the question of either Chinese or American “exceptionalism,” this appears to wholly dismiss the historical origins of Beijing’s foreign policy and strategic ambitions. No doubt there are elements of China’s narrative of the “century of humiliation” that are embellished, fabricated, and manipulated for diplomatic effect. But the baby cannot be thrown out with the bathwater. Chinese nationalism, and the Chinese people’s historical experience from the mid-nineteenth to the mid-twentieth centuries—which created that nationalism—are not just CCP propaganda. Simply put, China was serially exploited by foreign powers during that period. And although “the American people’s generous contributions to China’s development are a matter of historical record”—as the strategy document observes—so are Washington’s contributions to that earlier exploitation. A genuine mutual understanding between the United States and China will continue to be handicapped as long as Washington is unfamiliar with or dismissive of some of this history.

The “Implementation” section of the document effectively lays out the range of policies that Washington has launched or accelerated in response to the multiple challenges from China. This, too, is a comprehensive and appropriate list, including policies aimed at countering Chinese overt and covert influence operations in the United States and “unfair and abusive trade practices”; freedom of navigation operations to “push back on Beijing’s hegemonic assertions and excessive claims”; and fostering an international response when Beijing “promotes or abets authoritarianism” and “mercantilist economics.” This package is laudable, but again, parts of it are based on an exaggeration or misrepresentation of Chinese actions or ambitions—often equating all of China’s international behavior with that subset of it which is malign, unfair, predatory, or against the rules. Finally, the package bypasses several Trump administration policies that have set back potential progress in the competition with China, such as withdrawal from the Trans-Pacific Partnership (TPP), the tariff war, and the coronavirus misinformation blame game.