Why the Trump Administration Has Helped China 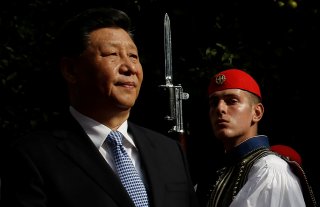 Strange as it may sound, China will miss the Trump administration, if, and when, it goes.

Undoubtedly, the Trump administration has been the most aggravating administration that China has had to deal with since the normalization process that Henry Kissinger began in 1971. It has launched a trade war that has damaged the Chinese economy a little. Restrictions have been placed on technology exports to China. A massive effort has been undertaken to cripple Huawei. Yet, the most galling move has been the effort to extradite Meng Wanzhou. Applying Western laws to Chinese citizens reminds the Chinese people vividly of the Century of Humiliation when Western laws were applied on Chinese soil.

Yet, if the Chinese leaders think long-term and strategically, as they are wont to do, they could also calculate that the Trump administration may have helped China. Clearly, the Trump administration has no thoughtful, comprehensive and long-term strategy to manage an ever-rising China. Nor has it heeded the wise advice of key strategic thinkers, like Kissinger or George Kennan. Kennan, for example, advised that the long-term outcome of the contest with the then Soviet Union would depend on “the degree to which the United States can create among the peoples of the world” the impression of a country “which is coping with the problem of its internal life” and “which has a spiritual vitality.” No such impression has been created by the Trump administration. Post-coronavirus and post-George Floyd, America is delivering the opposite impression. In relative terms, the Trump administration has raised the stature of China, which is now perceived as the more competent country in the world.

To be fair, America’s internal problems have preceded President Donald Trump. It is the only major developed country where the income of the bottom fifty percent has gone down for a thirty-year period leading to the creation of a “sea of despair” among the white working classes. John Rawls would have been appalled to see this. Indeed, as Martin Wolf of the Financial Times says, America has become a plutocracy. By contrast, China has created a meritocratic governing system. A meritocracy could well out-perform a plutocracy.

Equally importantly, Kennan emphasized that America had to assiduously cultivate friends and allies. The Trump administration has seriously damaged relationships with friends and allies. In private, the Europeans are appalled. Walking away from the World Health Organization (WHO) when the world never needed the WHO more, especially to help poor African countries, was massively irresponsible. Not one American ally followed the United States out of WHO. The Trump administration has also threatened tariffs on allies like Canada and Mexico, Germany and France. All this does not mean that the rest of the world will rush to embrace China. Indeed, the Europeans have developed new reservations about working closely with China. Yet, there is no doubt that diminishing global respect for the United States opens more geopolitical space for China. Madeleine Albright once said “We are the indispensable nation. We stand tall and we see further than other countries into the future.” The Trump administration may succeed in making America a dispensable nation, presenting another geopolitical gift to China.

In theory, such insults could have damaged the standing of the Chinese government in the eyes of its own people. The effect has been the opposite. According to the latest Edelman Trust Barometer, the country where the people have the highest trust in their government is China. It is 90 percent. This is not surprising. For the vast majority of Chinese people, the past forty years of social and economic development have been the best in four thousand years. Kennan spoke of domestic “spiritual vitality.” China enjoys it today. A Stanford University psychologist, Jean Fan, has observed that “in contrast to America’s stagnation, China’s culture, self-concept, and morale are being transformed at a rapid pace—mostly for the better.” The Chinese people are also acutely aware that China has handled the coronavirus crisis better than America. If America had the same rate of fatalities as China, then it would have had one thousand deaths instead of one-hundred thousand. Against this backdrop, the constant insults hurled at China have only provoked a strong nationalistic response, boosting the standing of the Chinese government. One small but critical point needs to be added here: no other government in the world hurls insults at China. America stands alone in this dimension, ignoring once again Kennan’s valuable advice: “And if there were any qualities that lie within our ability to cultivate that might set us off from the rest of the world, these would be the virtues of modesty and humility.”

If he were alive today, then Kennan would first advise his fellow Americans to step back and thoughtfully work out a comprehensive long-term strategy before plunging into a major geopolitical contest against China. Any such strategy, heeding the advice of thinkers like Sun Tzu, would first require a comprehensive evaluation of the relative strengths and weaknesses of both parties.

There is no doubt that America retains many magnificent strengths. It remains the most successful society humanity has created since human history began. No other society has sent a man to the moon. No other society has produced a Google and Facebook, Apple and Amazon, in short order. Even more remarkably, two of its biggest corporations, Google and Microsoft, are run by foreign-born citizens. No major Chinese corporation is run by a non-Chinese. China can tap the talents of 1.4 billion people; America can tap the talent of 7.8 billion, including talented Chinese. It would be a huge mistake for any Chinese leader to underestimate America. Fortunately, or unfortunately, that is not likely to happen.

By contrast, in evaluating China’s relative strengths and weaknesses, the Trump administration is making the mistake of underestimating China. Here the supreme ideological conviction that democracies will always triumph against a communist party system creates a particular ideological blindness in America. In reality, functionally, the CCP does not stand for the Chinese Communist Party. It stands for the Chinese Civilization Party. The key goal of the CCP is not to revive communism globally. It is to revive the world’s oldest civilization and make it again one of the world’s most respected civilizations. This is the goal that energizes the Chinese people and explains the unusual vibrancy and vitality of Chinese society. Equally importantly, the Chinese civilization has historically been the most resilient civilization. As Professor Wang Gungwu says, it is the only civilization to have been knocked four times over four thousand years. Each time it stood up again. There is no doubt that Chinese civilization is now a great renaissance.

It is therefore unwise for any American strategic thinker to assume that Americans cannot lose. It’s true that America hasn’t lost a major contest in over a hundred years but it has never had to deal with a competitor as formidable as China. Equally importantly, if the primary goal of the CCP is to improve the well-being of its people (and thereby revive Chinese civilization), there need not be a fundamental contradiction with the primary goal of any new American administration: to once again improve the well-being of the American people. Hence, when the Trump administration goes and America tries again to work out a more thoughtful long-term strategy towards China, it should consider a now unthinkable option: a strong Chinese civilization and a strong America can live together in peace in the twenty-first century. The world will be relieved and even cheer this outcome. And the American people will be better off.

Kishore Mahbubani is a professor in the practice of public policy at the National University of Singapore and the author of Has China Won?