The U.S. Army Is Getting Ready for the Robot Wars of the Future 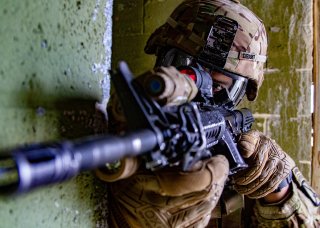 Robots fired machine guns, grenade launchers and anti-tank missiles at a range of targets during a Robotic Combat Vehicle live-fire warfare preparation exercise, a key step toward integrating a new fleet of armed ground drones to support future Army combat operations. The addition of these kinds of robots, with humans of course maintaining decision-making authority regarding the use of lethal force, continues to greatly reshape Army tactics, maneuver formations and cross-domain combat operations.

“We actually shot live bullets off of these robots. It's really exciting what we've proven out thus far, not only are the robots working extremely well, the payloads are accurate and effective,” Maj. Gen. Ross Coffman, the director of the Next Generation Cross-Functional Team for Army Futures Command, told the National Interest. The live-fire exercises were with the Robot Combat Vehicle Light and Robotic Combat Vehicle Medium, two interrelated, yet distinct Army robot efforts intended to introduce new levels of autonomy, weapons attack and surveillance for ground troops advancing to contact with an enemy. During the live-fire tests, the sensor, payload and weapons integration performance exceeded expectations, Coffman explained.

“We are seeing an increased stability or increased range that we didn't think was possible previously,” he added.

The robots were designed with technical standards intended to enable rapid integration of any sensor or upgrade so that it can receive software updates and new weapons as new threats emerge over time.

“Really anything is possible because the great people that helped us with requirements were very clear. They wanted these robots to be payload agnostic, and because you can plug and play different things on top of the robot, the interface between the payload and the robot has proven very capable,” Coffman said.

Coffman explained that due to advances in cross-domain networking and hardened connectivity, command and control for the robots could be performed from dismounted soldiers, larger manned vehicles or even air platforms navigating, directing and controlling the robots.

With the intent of optimizing manned-unmanned teaming possibilities, the robots are engineered with advanced, artificial-intelligence-enabled computer algorithms intended to enable progressively expanding degrees of autonomy. More and more, robotic sensors can perform tasks independent of human intervention such as navigational functions, sensing, networking and data analysis. Coffman explained that through systems such as aided target recognition, robots can themselves find, identify and acquire targets and perform autonomous obstacle avoidance exercises, but still benefit greatly from humans operating in a command and control capacity.

“For target acquisition, that's the payload and then if you talk about autonomous behavior, for the robot itself, like right now we know we can execute waypoint navigation, we can have teleoperation and we can do obstacle avoidance. And we're really making huge strides on additional autonomous behaviors in the missions they do,” Coffman said.

Coffman explained that the plan was to use the robots in tactical missions with soldiers to inform senior service leaders about when they may become a program of record.

“We're going to take those, those four lights, those four mediums, and then the four surrogates that we built for last year's robotic soldier experiment, and we are going to form them into a company,” he explained.

He has appeared as a guest military expert on Fox News, MSNBC, The Military Channel, and The History Channel. He also has a Master's Degree in Comparative Literature from Columbia University.