The U.S. Army Has Killer Plans for Its Excalibur 'Shaped Trajectory' Round 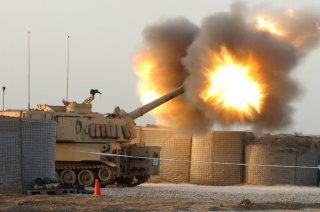 The U.S. Army is already exploring how to use its “shaped trajectory” 155mm Excalibur artillery rounds more effectively, including by extending the range, attacking moving targets, and tailoring blast effects to destroy enemy armor.

The “shaped trajectory” round, which uses advanced technology to adjust course in flight to hit obscured or otherwise unreachable targets, is an innovative weapon that was engineered by Raytheon and Army developers to revolutionize ground warfare. Beginning with the advent of GPS-guided Excalibur artillery in 2007, weapons developers have been working on a wide sphere of new variations. The round has progressed much over the years, beginning with the initial a-1 round able to fire 20km, a subsequent 40km-range Ia-2 round, and an advanced Ib round built with additional guidance and navigation technology to operate in a GPS-contested environment.

The Army continues to discover new applications for these “shaped trajectory” rounds. For instance, one such application includes the laser-guided Excalibur “S” round, which is able to follow a laser spot onto a moving target. There is also a “shaped charge” round which includes state-of-the-art anti-armor explosives. The new weapon represents an exponential leap beyond existing top-of-the-line anti-tank weapons such as the TOW and Javelin missiles; the Javelin reaches ranges up to 2.5 miles and the TOW missile can hit targets out to 4,500 meters. The Excalibur “shaped charge” brings an entirely new anti-tank weapon to the battlefield, one that is able to reach as far as 30km (18.64 miles). Senior Army weapons developers explain that extending ground-war attack ranges changes some of the traditional elements of combined arms maneuver warfare.

Excalibur is also being fired from the Army’s emerging Extended Range Cannon Artillery (ERCA) weapons prototype and is the only projectile that can precisely strike a target at more than 65km, as demonstrated on March 6, 2020. The ERCA uses a longer, 58-caliber cannon to fire 155m rounds as far as 70km. Until ERCA, existing 155m Excalibur rounds were fired from 39-caliber tubes on the U.S. Army’s mobile M777 towed howitzer, the M109A7 Paladin self-propelled howitzer, or the 52-caliber tubes on the Army’s international partners’ guns (including Sweden’s Archer and the Netherlands’  Panzerhaubitze 2000.