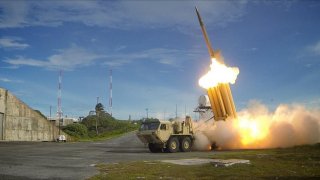 The Army test fired its new Precision Strike Missile (PrSM) during its Project Convergence 21 exercise in the Arizona desert as part of an effort to establish the weapon as multi-domain capable.

The PrSM, which broke new range records in a test earlier this year, is envisioned as a long-range precision-strike weapon able to destroy targets on land or at sea. Those capabilities were tested at Yuma Proving Grounds, Ariz.

PrSM broke new records during a test at Vandenberg Space Force Base in California. The weapon change the paradigm for ground warfare by bringing new ranges and precision against enemy ground installations, equipment, air defenses, command and control structures, and even moving targets.

While initially conceived of as a land-attack weapon to outrange the opposition and destroy enemy installations, armored columns, and air defenses, the PrSM can also be used as a maritime attack system fired from land to destroy enemy surface ships.

PrSM maker Lockheed Martin said in a statement that the test firing at Vandenberg exceeded previously achieved ranges and traveled farther than four hundred kilometers. The weapon is now going through the engineering, manufacturing, and development phase, a key testing and development step intended to prepare the weapon for deployment in 2023.

“In the future, we want to bring in more shooters and kind of expand,” Gen. John Murray, Commander of Army Futures Command told the National Interest several months ago. “And it’s about scaling, right? So, you know, how, how far can we expand the network? How far can we expand their scale in the number of shooters we bring? And how far can we scale the number of sensors? Because you’re going to reach an upper boundary at some point. And so what is that upper boundary? And you know, how does that work in a contested environment?”

As multi-domain networking technologies continue to increase and strengthen, the Army is expected to find new applications and targeting possibilities for its PrSM, a weapon developed following Russia’s violation of the INF Treaty. Following Russia’s violation of the Intermediate Nuclear Forces (INF) Treaty, which had previously put limitations on mid-range missiles, the U.S. Army began testing and developing a number of ground-fired weapons capable of attacking at these ranges.

A weapon with a range of about five hundred kilometers does bring a mid-range attack capability to places like Europe, home to many U.S.-allied countries. The missile is intended to hold an approaching force at risk while being at lower risk of an enemy strike or counterattack.