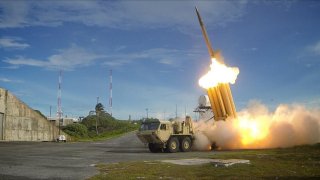 The Army is achieving breakthrough success with its first-of-a-kind Precision Strike Missile (PrSM) by firing the weapon as far as five hundred kilometers. It has been developing the missile over several years in an effort to enable its soldiers to deploy medium-to-long-range land-fired missiles capable of targeting enemy forces from great standoff distances.

The weapon aims to propel a U.S. military strategy that has changed and evolved following Russia’s violation of the Intermediate-Range Nuclear Forces Treaty, which placed limits on deploying weapons able to travel at those ranges. This is the reason why the U.S. military is interested in developing a land-fired missile similar to the long-range Tomahawk Land Attack Missile or even a ground-launched Standard Missile-6.

The Army test-fired the PrSM at its most recent Project Convergence exercise at Yuma Proving Grounds in Yuma, Arizona. Army officials are pleased with the results, according to Army Futures Command Commander Gen. John Murray.

Army weapons developers describe the PrSM as a weapon that will eventually “out range” an enemy in a way that changes traditional notions of combined arms maneuver. PrSM draws upon GPS and inertial measurement unit technology. There is a wide range of possibilities for advancing this technology ranging from targeting accuracy, guidance and datalink communication. So, it is possible for the Army to further protect its guidance networks and explore the realm of less-jammable targeting technologies.

This new range of five hundred kilometers is significant because standard ranges for artillery are typically in the area of thirty kilometers to forty kilometers. New programs such as the Extended Range Cannon Artillery can fire as far as sixty kilometers or seventy kilometers. Now, with this new extended range, should there be a contingency wherein fighter jets are unable to attack enemy air defenses from the air, they could get assistance from ground forces.

The Army is in the process of upgrading the PrSM with a new targeting “seeker” likely intended to make its impact more precise as well as semi-autonomous missiles that are able to shift course in flight and destroy maneuvering or otherwise unavailable targets.