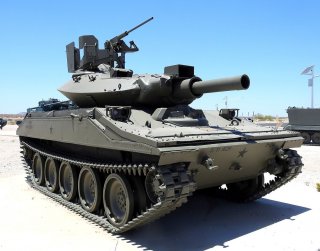 Since the M551 Sheridan light tank was retired in the mid-1990s, the United States has not had a light-tank platform. The Sheridan, first thrown into service during Vietnam, was the last of an era. Light, air-mobile, and able to support infantry against hardened targets and massed enemy infantry assaults, the Sheridan was imperfect but appreciated. Though retired without a replacement, two platforms are now contending to be the United States’ next light tank.

As expected, the Army stated that the light tank will be used to “neutralize enemy prepared positions and bunkers and defeat heavy machine guns and armored vehicle threats during offensive operations or when conducting defensive operations against attacking enemies.” There are two designs available.

BAE’s bid builds upon the M8 Armored Gun System, an earlier attempt by United Defense (bought by BAE Systems in the mid-2000s) to replace the Sheridan light tank. Ultimately the M8 project was canceled to free up funds for other programs.

By building on the M8 design, BAE isn’t forced to start from scratch, of crucial importance to the Army’s desired rapid prototyping. The compact design features a proven 105-millimeter main gun complete with autoloader that BAE claims will allow crews to fire up to twelve rounds a minute.

The BAE prototype features “scalable” armor and “survivability subsystems” that protect tankers while on the battlefield, offering the same degree of protection as BAE’s Armored Multi-Purpose Vehicle. The platform is light and compact enough for not one but three to be transported by C-17.

A peek at the General Dynamics website doesn’t reveal much about its light tank prototype—but there is some information available.

The bid by General Dynamics is a mish-mash of other platforms and is considerably larger than BAE’s smaller bid. Based on the GD’s AJAX armored fighting vehicle chassis, their prototype features a modified M1 Abrams main battle tank turret.

According to company information, their AJAX-Abrams prototype benefits from having an "ultra-modern diesel engine provides high power-to-weight ratio with extended tactical range,” as well as a hydropneumatic suspension. The main gun, which GD states ambiguously as “large-caliber” could possibly be the same 120-millimeter main gun as the M1 Abrams.

If so, the GD prototype would offer substantially more firepower and a proven gun system. Still, a larger turret and main gun come at a cost—the GD bid is thought to be both larger and heavier, which if confirmed would adversely affect air transportability.

This is an ongoing program about which there is still much to be learned. Keep an eye on this topic for additional future information.

Caleb Larson is a Defense Writer with the National Interest. He holds a Master of Public Policy and covers the United States and Russian security, European defense issues, and German politics and culture.