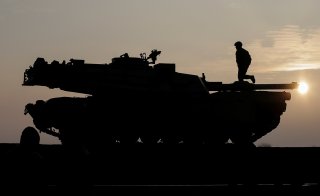 The U.S. Army is adding more heavy armored firepower to its arsenal of combat vehicles to include a large volume of upgraded Abrams main battle tanks, including a recently refined M1A2 SEPv3 tank configuration intended to bring the classic platform into a new era of modern, major-power warfare.

The Abrams V4, to emerge by the mid-2020s, will include new sensors, color cameras, laser rangefinder technology, ammunition data links and meteorological sensors to help weapons sights and fire control account for weather conditions when it comes to firing rounds at enemy targets. The M1A2 SEP v4 will also be configured with a new slip-ring leading to the turret and on-board ethernet switch to reduce the number of needed “boxes” by networking sensors to one another in a single-vehicle.

It is not a surprise that the Army is still looking to add large numbers of Abrams tanks to the force as there appears to be consensus among many weapons developers that there still is, and likely will be, a substantial need for heavy armor when it comes to the possibility of major power mechanized, force-on-force warfare. Abrams tanks can also function as a psychological deterrent because their presence can sometimes prevent potential adversaries from attacking or taking hostile action.

While lightweight armor composite materials able to bring significant protections at lower weights are likely evolving quickly, they may not necessarily be enough to fully replace heavy armor. Also, in the event that such composites do emerge, some of which may already be incorporated into the Army’s new Mobile Protected Firepower light tank or new infantry carrier, there certainly might be great value in stacking many of them on top of each other or, as may be the case with the Abrams, simply adding them onto the armor that is already there.

Heavy armor and the battle-tested Abrams tank, are likely here to stay for many years, as evidenced by the Army buy.