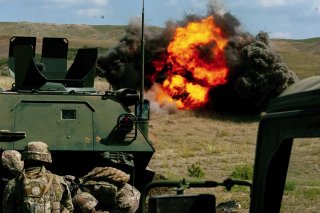 The Army is experimenting with arming small, soldier-operated drones with guns to shoot enemy targets with either a 9mm pistol or tiny ink-pen-like gun barrel mounted on.

As for mounting a 9mm handgun underneath a drone, Edwards explained how engineers “figured out how to absorb the recoil off the weapon.”

The experimentation is early on, he explained, because the prospect introduces a number of anticipated challenges such as trying to assess what kind of weapon can successfully mount on and be carried by a small form-factor drone with sufficient cameras for viewing targets.

“It is a small system already, so what is the most it can carry? It has to see and process information so it can recommend a course of action,” Edwards said.

The drone will also have to be integrated with the right kind of mobile, mounted camera system able to send target data back to a human operator.

However, despite all of these challenges or technical complexities associated with the venture, the concept of loading small arms munitions onto forward-operating portable drones does introduce some interesting new tactical possibilities.

First and foremost, a small drone armed with a pistol controlled remotely by a human operator can attack an enemy soldier on the other side of a ridge, behind a rock, or even inside a building. It can enable point-to-point small arms fire while protecting the shooter. Such a possibility could clearly bring new possibilities to close quarter battle by offering new angles of attack. The presence of an armed drone might force enemies to reposition and move, potentially exposing themselves to targeting opportunities.

Armed drone aerial small arms attack would be very difficult to defend against, particularly if there were numerous mini-gun tubes loaded onto the drone as is the case with the ink-pen-like drone.

Unlike drones that are themselves engineered to become explosives, mini-armed drones could be recoverable and, for example, return to an operator for reloading and retasking. The system will need to have the right kinds of hardware configuration, software, and camera systems enabled by some kind of data link transmission sufficient to send targeting information.

Finally, despite fast-emerging levels of AI-enabled targeting and attacking autonomy, the data link would have to be strong and reliable enough to ensure that a human remained in the loop regarding decisions about the use of lethal force