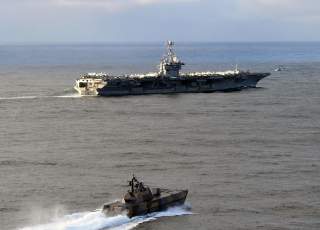 The Look Out II, developed by the Yunzhou Tech company, was displayed at Airshow China 2018 in Zhuhai last week, according to China's state-owned Global Times.

"Loaded with four precision missiles that can hit targets 5 kilometers [3.1 miles] away, the vessel is also equipped with a radar and electro-optical system enabling it to carry out reconnaissance missions," Global Times said. The vessel is 7.5 meters (24.6 feet) long and 2.7 meters (8.9 feet) wide, weighs 3.7 tons and has a maximum speed of 45 knots.

That's roughly the same dimensions as a U.S. Coast Guard Defender-class small boat, a manned vessel used for missions such as rescue and port security. A photo of the boat shows what looks like a turret with four small boxes, suggesting a weapon the size of an anti-tank missile. Yunzhou Tech says the robot boat test-fired a missile in October: the missile allegedly hit the target with the first shot. While artificial intelligence will steer the boat, human authorization is still needed to fire weapons.

Indeed, Su Zhen, Look Out II project director, told the Global Times at Airshow China that "although the vessel was relatively small and its missile could not reach very far, it was fast and stealthy, enabling it to get nearer its target and launch close-quarters strikes."

"It is not the Look Out II's goal to sink an enemy vessel on its own," Su said. "As long as we damage the enemy ship's key structure like the command center, armory or engine room, it is enough for us to get the upper hand so that we can follow up."

Yunzhou Tech intends to offer the Look Out II to the Chinese military: it also says that foreign nations, such as Namibia, have expressed interest. Israel has developed unmanned missile boats. Yunzhou Tech claims China is the second nation to do so, and Look Out II is China's first attempt. Yunzhou Tech, also known as Oceanalpha, bills itself as the world's largest manufacturer of unmanned surface vessels, or USVs. The company drew attention last year when it announced plans to develop autonomous cargo ships.

By itself, a Look Out II-type boat does not boast impressive firepower. But then, robot missile vessels won't operate by themselves. The navies of the world are bracing for "swarm boat" attacks in which a flotilla of small boats will attempt to overwhelm larger targets such as destroyers or aircraft carriers, like a pack of hyenas trying to bring down an elephant. Iran and North Korea already plan to use swarms of manned small boats armed with light weapons.

China is a different case. It already manufactures many of the world's hobby drones: DJI, the world's largest commercial drone maker, is a Chinese company with more than 70 percent of the commercial market. American experts warn that China is overtaking the U.S. in the field of combat drones.

Of course, it remains to be seen how these drone swarms will work in the chaos of combat, where communications can fail or be jammed. Nonetheless, with an immense manufacturing capability, and as home to companies who dominate the unmanned vehicle market, China is well-poised to sting the U.S. Navy with the bite of a thousand drones.